The 2017-released KonoSuba game by Mages. 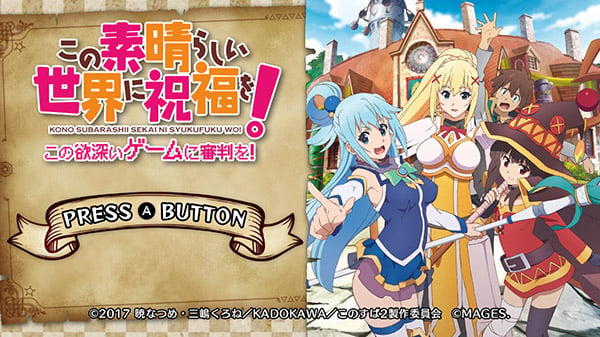 5pb. has released a Switch version of KonoSuba: God’s Blessing on this Wonderful World! Judgment on this Greedy Game! via the Nintendo eShop in Japan at a 25 percent-off launch discount price of 2,970 yen. The price will change to 3,960 yen after January 11, 2021.

KonoSuba: God’s Blessing on this Wonderful World! Judgment on this Greedy Game! first launched for PlayStation 4 and PS Vita in September 2017 in Japan. A PC version followed via DLsoft in December 2017.

The game follows original story in which the protagonist Kazuma puts on a cursed ring that steals the underwear of those around him. The following day, he finds a large amount of underwear in his possession, but is unaware to whom they belong. After asking Vanir for his expert opinion on the ring, Kazuma learns that a vast sum of money is required to lift its curse. From there, a new adventure begins to gather the funds to remove the cursed ring.

Yaminoari ⋅ Tales of Arise ‘Tales of Festival 2020’ trailer, further news to come this spring ⋅ 11 minutes ago