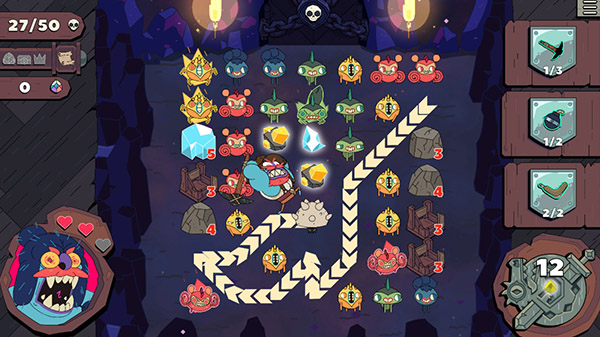 The Switch version of Capybara Games-developed puzzle game Grindstone is now available via the Nintendo eShop for $19.99 / €16.79 / £15.09 with a 25 percent-off launch discount, the developer announced.

iam8bit has also opened pre-orders for a physical edition, which includes an exclusive set of custom creep-gut-colored crayons for $34.99. It will ship in 2021.

“We’re stoked for everyone to finally play Grindstone on Nintendo Switch,” said Capybara Games studio director Joel Burgess in a press release. “We’ve made major, Switch-focused UI improvements, and included all of our content updates so far, making this an awesome entry point for new players, or existing stonegrinders who want to experience the game on console. We’re incredibly excited to bring the world of Grindstone to a whole new audience, and can’t wait to share even more updates in 2021.”

Here is an overview of the game, via Capybara Games:

Capy’s colorful puzzler makes its debut on Nintendo Switch with a year’s worth of content updates not seen in its original release, including:

Like Grindstone’s brawny protagonist Jorj, Capy is hard at work, and Grindstone will continue to see free meaty content updates on all platforms in the coming months.

Grindstone is a game of sword-slashing puzzle battles from the award-winning studio behind BELOW, Sword & Sworcery EP, Super Time Force Ultra, Critter Crunch, and Might & Magic: Clash of Heroes! Grindstone first released on Apple Arcade in September 2019 to widespread acclaim, earning many awards and nominations.

Grindstone Mountain is overrun with vicious Creeps! Slay your way up its treacherous peak where fortune, glory (and death) awaits!

It’ll take sharp puzzle skills and an even sharper blade to slice your way through the swarms of bloodthirsty Creeps dwelling within Grindstone’s dungeons. Battle bosses, loot resources, discover long-lost blueprints for powerful gear, all while eviscerating the innards from your deadly foes! Over 200 levels of intense puzzle-battling madness!

Super Meat Boy Forever launches December 23 for Switch, in January 2021 for PS4 and Xbox One Previous post
Hoa launches in April 2021 Next post