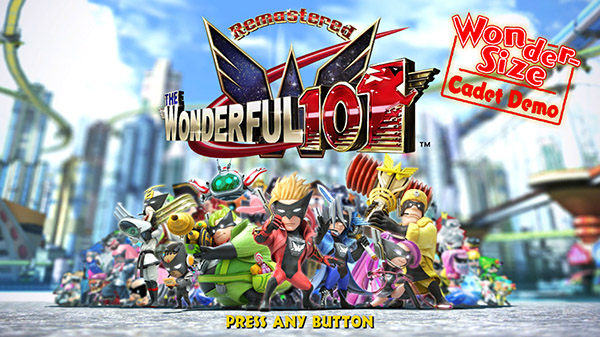 PlatinumGames has released the version 1.03 update for The Wonderful 101: Remastered, as well as the “Wonder-Size Cadet Demo” for PlayStation 4, Switch, and PC via Steam.

Here is an overview of the update and demo, via PlatinumGames:

The version 1.03 update adds the new “Wonderful Code” feature to the game. By entering the code “UMBRANGIFT” players can unlock Wonder-Bayonetta and the same set of support items that are available in the demo. Moreover, to celebrate the release of the demo we are also revealing the code for Vol.2. By entering the code “ANGELSLAYERS” players can unlock Wonder-Jeanne and Wonder-Rodin. We’ll be revealing more codes in the future, so be on the lookout for more Wonderful Codes!

As the name suggests, this demo delivers a Wonder-Size amount of content, letting players enjoy the prologue and all of Operation 001 (parts A, B, and C), a total of about two hours of gameplay.

The demo also gives players access to the hidden character Wonder-Bayonetta, based on the main character of the Bayonetta series. While the gorgeous witch is normally fairly difficult to recruit to the team, in this demo she has been made available from the start as a gesture of appreciation for our fans.

Other bonuses like in-game currency and a selection of support items are also available from the start of the demo, so that even beginners can set off on this dynamic adventure fully equipped.

The Wonderful 101: Remastered is available now for PlayStation 4, Switch, and PC via Steam.

Watch a trailer for the demo below. View a set of screenshots at the gallery.