A lengthy look at the latest game from the When They Cry developer. 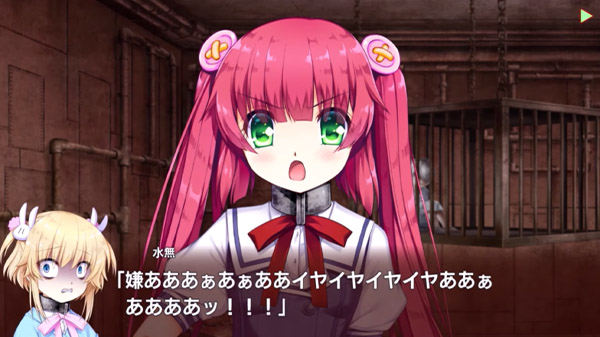 Four girls, locked in an unfamiliar and ominous room.

When, how, by who, and to where were these close friends kidnapped? It was all unclear. None of the girls have any recollection of a place like this.

At some point, an iron collar was attached to each of the girls’ necks. Those collars were connected to chains, and each chain was connected to a chair at one of the room’s four corners. These were torture chairs that give off an ominous impression.

Four girls frightened in an ominous room with no exit. There, a large cage appeared from the ceiling. Inside, a boy was trapped. The white-robed boy is unable to communicate, and even his emotions show no variation. He, too, must likely be a “prisoner” such as the girls…

“Let me tell you how to escape.”

An ominous voice echoed throughout the room.

I have prepared two fates for all of you. One where everyone in this room dies. The other where only three girls are saved. This is a trial to test the fate of you four.

When the time limit expires, everyone in this room will die.

A group of girls, suddenly attacked by a deadly premonition and hair-raising horror…

Kaleidoscope of Phantom Prison, which is due out for PlayStation 4, Switch, and PS Vita on December 17 in Japan.