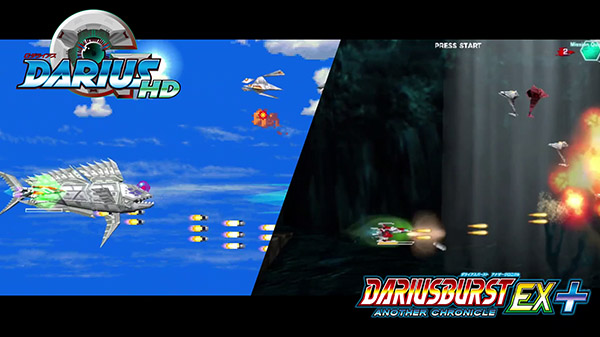 Taito has released the latest trailer for Darius Cozmic Revelation.

Here is an overview of the collection, via western publisher ININ Games:

G-Darius HD and Dariusburst Another Chronicle EX+ are the two 3D games of the Darius series, both of which will include updated features to appeal to newcomers and longtime fans of the series alike.

G-Darius HD is the port of G-Darius in high resolution—developed by the emulation specialists at M2. The game can also be played in low resolution like in the original arcade version.

From the epic boss battles to the memorable soundtrack, G-Darius stood out when it first got released in the arcades and up to these days, critics and fans are praising this game as a prime example of how to bring a 2D game series properly to 3D.

Dariusburst Another Chronicle EX+ is the latest iteration of the awesome Dariusburst series which started in 2009 on PSP, with gorgeous 3D graphics and additional features to expand the arcade version from 2010. The game is developed by Pyramid and will include all features of the arcade version of Another Chronicle EX, as well as several new elements that will be revealed during the next weeks.

Darius Cozmic Revelation is due out for PlayStation 4 and Switch on February 25, 2021 in Japan, and this winter in the west.