A co-op RPG beat 'em up that blends dungeon-based action with a story about the challenges of adolescence, friendship, kinship, family, and duty. 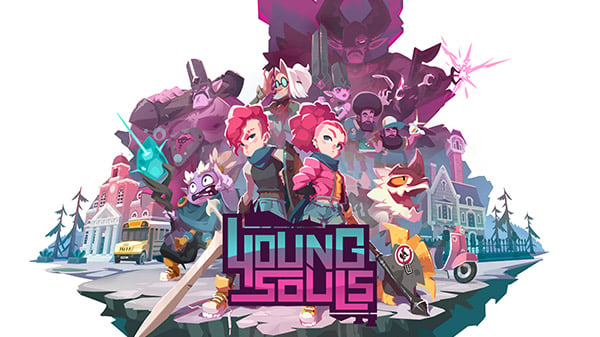 Cooperative RPG beat ’em up Young Souls will launch first on Stadia followed by a later release on PC via Steam, publisher The Arcade Crew and developer 1P2P announced.

Young Souls combines the beat‘em up and RPG genres in a world created with stunning art direction. Explore the world of humans and that of the goblins, both teeming with enemies but also full of unexpected and friendly encounters waiting to be discovered.

Grab your weapons and set forth in search of your adoptive father through epic dungeons in the goblin realm. Arm yourself with the toughest armour and an arsenal capable of taking on the hordes of enemies and bosses that await on the other side of the portal.

Your equipment is your most valuable ally in combat. Adapt your gameplay style to each dungeon by changing the items you take with you on to the battlefield.

Orphaned from a young age, Jenn and Tristan have always navigated the world by themselves. The naturally rebellious twins, flamboyant in both hairstyle and character, could only count on each other in a world they regard as hostile.

But their path crossed with that of a kind and loving scientist, if a little eccentric, who took them in and treated them as his own children. One day, the scientist suddenly disappears in mysterious circumstances. Jenn and Tristan’s world is turned upside down and they find themselves alone in the world once more. While exploring the manor’s hidden cellars, they find a portal that transports them to a parallel world where goblins live. For the twins, this is the start of a wild and enthralling quest to find their adoptive father as well as their place and identity in the world.

Young Souls is a journey between two worlds, each one full of experiences and encounters that will shape the character and fate of our heroes.

Lifting weights at Happy Fit improves your statistics and allows you to gain more strength, dexterity and agility. Want to fight the ruffians in style? You can buy the latest shoes and accessories at the shops Solid Sneakers and Teen Spirit to make your equipment unique.

After a well-deserved nap, it’s time to kit yourself out from head to toe and enter the world of goblins – the place you want to be to bash some skulls and find the professor. Mobs of enemies will be waiting for you with spears and swords in the vain hope it will be enough to stop you…

Fight Your Way to Your Foster Father

Fighting goblins is not as easy as fighting the weight machine at Happy Fit. Combat is punishing and demanding, but you’ll be rewarded with loot chests, which will help you forget the injuries you suffer on the battlefield.

There are tons of possible combinations that vary the stats of your equipment, weapons and the gameplay of your character. Adopting an attacking, defensive or balanced strategy is easy for anyone who dares venture to the land of goblins.

Brawling with enemies obviously means epic boss fights that will make you sweat.