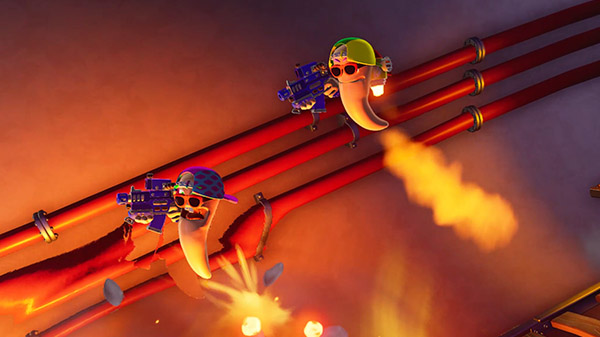 Users who pre-order the game via Steam will receive the “New Challenger” bonus pack, which grants access to a plethora of exclusive cosmetic items, including an outfit, beanie, skin pattern, baseball bat skin, player banner, and challenge title. Further cosmetic items will be available and unlocked as players progress through the ranks, including different hats and glasses.

“Revealing the release date of Worms Rumble is a very special moment for us, and we’re thrilled that it’s only a matter of weeks away,” said Team17 creative director Kevin Carthew in a press release. “We’re very excited to see players take to the arenas, and it’s fantastic that through the PlayStation 4 / PC cross-play open beta next month we can give them a taste of what’s to come in December. It’s even more special considering we’re celebrating the 25th anniversary of the series in days after the beta, with Team17’s own 30th anniversary coming up just days after the Worms Rumble launch!”

An arena featuring a fantastical portal that can change the environment in dramatic ways, Portal Park also includes underground train tracks that provide rapid transit to other parks of the map. The announcement of Portal Park follows on from the reveal of Missile Mall in the summer, which takes place in a huge, sprawling shopping mall complete with a ballistic missile. Fan favorite gadgets, including Grapple Guns and the Jet Pack are also making a return ready for players to traverse the maps and get the edge over the competition.

Worms Rumble is Worms like you’ve never played it before, with intense, real-time, arena-based 32-player cross-platform combat. Get ready to rumble in Deathmatch or Last Worm Standing modes where you’re only ever a Holy Hand Grenade away from death!

Use a variety of fan-favorite weapons like the Bazooka and Shotgun plus all-new additions to the armory to bring the pain to your invertebrate opponents as you climb the ranks. Customize your worm, take part in challenges and seasonal events and experiment with new ways to play in The Lab. This is Worms, reinvented.