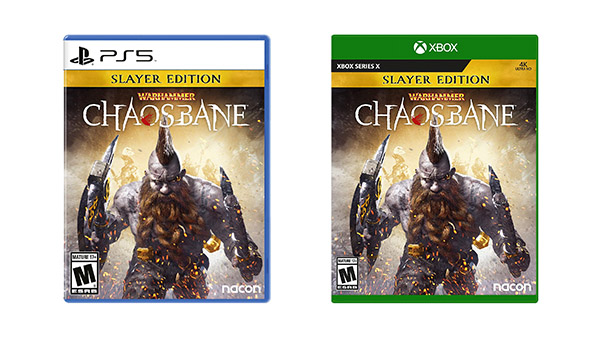 Warhammer: Chaosbane Slayer Edition will launch for Xbox Series and PC on November 10 worldwide, followed by PlayStation 5 on November 12 in North America, Australia, and New Zealand, and November 19 in the rest of the world, publisher Nacon and developer Eko Software announced.

The Slayer Edition includes all 12 downloadable content packs, every update including Keela the Dwarf Engineer, and the Tower of Chaos, all running in 4K resolution at 60 frames per second. It also includes a new character: Jurgen Haider the Witch Hunter, which will be available as paid downloadable content for the current-generation version of Warhammer: Chaosbane.

Nacon also announced a free patch for current-generation platforms, which adds improvements for new players and “fans of the first hour of the game.” The two hubs of Act 1 and Act 1 have been expanded, and the area around the camp of Act 2 has been enhanced with new enemies. There is also a new area—the cemetery—which adds a new environment and larger bestiary, with new enemies such as Daemon Princes, Skullcrushers (mounted and on foot), a Chaos Warrior, and new cultists. This patch is already included in the Slayer Edition.

Here is a brief overview of the game, via Nacon:

The first hack-and-slash set in the Warhammer Fantasy Battles world, Warhammer: Chaosbane thrusts players into the heart of the Old World, a continent scarred by the Great War Against Chaos—a bloody conflict that has ravaged the Empire of Man. You can play as a Human, High Elf, Wood Elf, Dwarf, Dwarf Engineer, or Witch Hunter as you explore the iconic areas of the Warhammer Fantasy Battles world, which has captivated millions of fans worldwide.

Warhammer: Chaosbane is available now for PlayStation 4, Xbox One, and PC via Steam.

Watch a trailer and Xbox Series X gameplay video below.