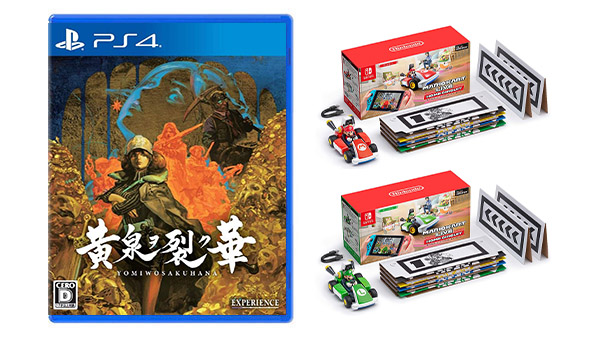 Yomi wo Saku Hana for PlayStation 4 and Switch, and Mario Kart Live: Home Circuit for Switch are the highlights of this week’s Japanese game releases.

First launched as a digital-only title for Xbox One back in June, Yomi wo Saku Hana is the latest dungeon RPG developed by Stranger of Sword City and Demon Gaze studio Experience. It puts the player in the role of an employee (section manager) of a company that manages Undernaughts (underground miners) hired by illegal means. Tasked with leading your employees through a labyrinth that you become trapped in by the “Mad King,” the player will utilize the “Switch Boost” power to challenge “monsters” named “Yomi,” as well as the “Yomi no Hana” ability to clear paths forward and return to the surface alive.

Mario Kart Live: Home Circuit is an augmented reality version of the popular kart racing game series developed by New York-based Velan Studios. Available in “Mario Set” and “Luigi Set” versions, the package includes a copy of the game software, a physical kart, four gates, two arrow signboards, and a USB charging cable. Players place gates around their home to create a custom course layout, then race the physical kart using their Switch as the controller. Read more about the game here.