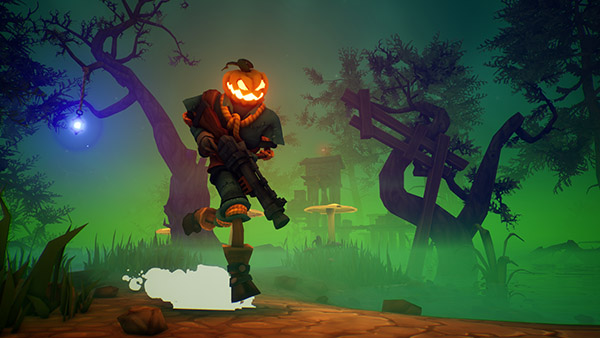 3D platformer Pumpkin Jack will launch for Xbox One, Switch, and PC via Steam, GOG, and the Epic Games Store on October 23, publisher Headup Games and developer Nicolas Meyssonnier announced. A release date for the PlayStation 4 version was not announced.

Update 12:35 p.m.: The PlayStation 4 version will launch “a few weeks later,” the game’s official Twitter account confirmed. The tweet reads: “Concerning the PS4 logo not showing at the end of the trailer: Don’t worry, the game will come on PS4 too! But due to many reasons (mostly COVID), the game will be delayed on PS4 and will come a few weeks later. I am REALLY sorry about this and hope that you understand it all.”

Pumpkin Jack is a spooky scary 3D platformer in which you embody Jack, the Mythical Pumpkin Lord. Dive into an epic adventure through otherworldly landscapes and help the Evil annihilate the Good!
​
Follow the will of the Devil himself and slay your nemesis in an epic quest that will take you on a journey in the Boredom Kingdom, a mythical realm shattered by the curse. You will meet friends along the way, from a haughty owl to a snarky crow!

Discover stunning atmospheres in a colorful yet spooky scary Kingdom. Travel through epic and dramatic settings, with each level having its own eerie atmosphere. Using a vibrant palette and high-quality lighting effects, Pumpkin Jack invents its own unique cartoon universe inspired by the classic PS2 graphic style, made with Unreal Engine 4.

Pumpkin Jack is a classic 3D Platformer before anything else! Every level will challenge you through several themed platforms, all giving you new trials to complete. You will have to master the arts of dodging, timing, and movement to vanquish Jack’s foes. During the dynamic real time battles, choose which weapon you want to use and strike at the critical moment!

Solve puzzles that focus on physics, gravity and reflection. Inhabit a pumpkin head and burn books, hammer some moles, create a path for magic spheres… And there is more: In each level, you will be faced with an action sequence using a new exclusive gameplay!