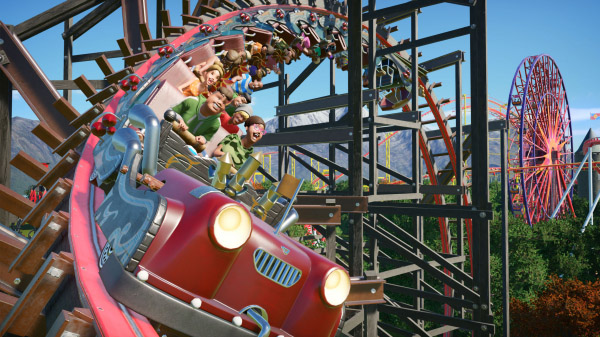 Planet Coaster: Console Edition will launch for Xbox Series, Xbox One, and PlayStation 4 on November 10 worldwide, and for PlayStation 5 on November 12 in the United States, Japan, Canada, Mexico, Australia, New Zealand, and South Korea, followed by November 19 in the United Kingdom, Europe, and the rest of the world, developer Frontier Developments announced. It will cost $49.99 / £39.99 / €44.99.

A digital-only “Deluxe Edition” will also be available for $59.99 / £49.99 / €54.99, which includes the base game and access to both the “Magnificent Rides Collection” and “Classic Rides Collection” for a total of 18 new rides and coasters.

Pre-orders for either edition at participating retailers will receive the “Oswald’s Magnificent Machine” ride, which was designed by Planet Coaster impresario Oswald B. Thompson and “embodies all the fun and excitement Oswald strives to achieve in his parks.”

Here is a brief overview of the game, via Frontier Developments:

Frontier’s first ever next-gen title brings all the fun and thrills of the critically acclaimed PC original to console. Built from the ground up, Planet Coaster: Console Edition features redesigned interfaces, a brand-new radial menu and completely new control system. Anyone can create the coaster park of their dreams by taking advantage of accessible and powerful tools, including detailed piece-by-piece construction and simple-to-use blueprints. And with the Frontier Workshop, players can find an endless source of incredible content at their fingertips to help personalize every aspect of their park or upload their own creations for people around the world to enjoy. This global community of content creators offers unlimited inspiration for those looking to take their parks to the next level or share their own latest creations to inspire others.

Not only will they have free reign to decide what goes in the park, but precisely how it runs too, making meaningful choices in its day-to-day operations. From hiring staff to setting drinks prices, expanding borders to researching and purchasing attractions, players of all skill levels will get to preside over the coaster park of a lifetime.

Whether diving in for a casual session of the game’s open-ended sandbox mode where money is most definitely not an issue, putting park building and money-making skills to the test in challenge mode, or immersing themselves in the development of a thriving coaster park in the richly rewarding career mode, Planet Coaster: Console Edition is sure to provide endless entertainment however players choose to play.