PC version due out in Early Access in March 2021. 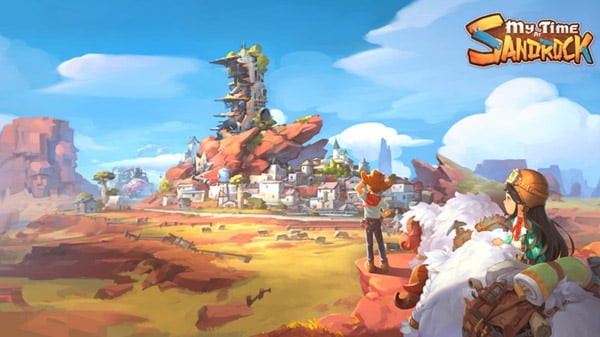 Pathea Games has announced My Time at Sandrock, a sequel to the January 2019-released simulation RPG My Time at Portia. It will launch in Early Access for PC via Steam in March 2021, followed by a full release for PC via Steam, GOG, the Epic Games Store, and other storefronts in spring 2022, and PlayStation 5, Xbox Series, PlayStation 4, Xbox One, and Switch in summer 2022.

A Kickstarter campaign seeking $100,000 in funding launched alongside the announcement. According to the developer, “there are a couple of features that we really want to do well this time around, and any extra funding would go a long way to ensure that.” Those include a multiplayer mode and self-publishing.

Here is an overview of the game, via its Kickstarter page:

When we started working on Sandrock, it was supposed to be a downloadable addition to My Time at Portia. But as we delved deeper into game production, we realized that in order to fully express the tale of Sandrock, we needed to start from scratch. We required better graphics, better optimization, more story, and more satisfying gameplay systems: basically, we needed better production values across the board. On top of that, we really wanted to include a form of multiplayer that would really meet expectations for our players, and My Time at Portia’s programming structure just didn’t support that.

So, we set a few goals. First, Sandrock will have a similar pathos to My Time at Portia, but offer a completely new experience with new types of gameplay. We’re still aiming for a Miyazaki-inspired kind of world, but with a few other surprises thrown in… Second, we wanted to have the overall story arc be more satisfying, but also with more focus on each individual NPC. Third, we’re going to have a dedicated single-player RPG and a special mode where friends or strangers can play together. Fourth, optimize it and make it as bug-free as possible (we learned a lot of lessons from Portia). Fifth, make sure the sound and voice-acting in this game are up to standard. Finally, we’re going to self-port to the consoles so that we can make sure all the content is consistent across all platforms.

Recruited to Sandrock to be a Builder, you’ll arrive to find the town in a sad state. Shops are run down, buildings are empty, and people are looking to leave. It’ll be up to you to use your wits and skills to unite the townsfolk and rebuild the city into a beacon of prosperity.

My Time at Sandrock will maintain the simulation versus RPG balance that My Time at Portia had, with more depth for both. We are aiming to give the player a truly satisfying feeling when the game “ends.” We’re also working to give you a beautiful open world to gather materials, explore, and maintain a homestead. There will be mesas, deep canyons, vast deserts, endless salt plains, breathtaking ruins, and more!

Returning Portia players will find plenty of familiarities, but still just as many new things we think will only add to the workshop building experience. We’ve added enough gameplay tweaks in to keep things fresh, and also reworked some of the things players didn’t like about Portia. This is not a simple reskin and rewrite of Portia with new NPCs.

Chronologically, this game takes place around the same time as My Time at Portia; returning players will be able to enjoy seeing certain events that influenced Portia’s development from a new perspective.

The World of Sandrock

Sandrock is a city-state located in the Eufaula Desert within the Alliance of Free Cities. It was founded beside Martle’s Oasis on top of an ancient metropolis. At first, the city attracted many prospectors interested in an extensive supply of relics hidden beneath the desert, but, as time went on, the oasis dried up, leaving the city unable to sustain a large population. Many people left, leaving the place in its vagarious state found today.

Water is a premium in Sandrock, with the only source being from Martle’s Oasis. Wood is also a rare resource, as not many trees grow in the area. Most of the trees around the oasis were cut by the original settlers: nowadays, you’ll have to find alternatives. The good news is that there are vast amounts of relics around these parts, some of them even hidden in plain sight!

The People of Sandrock

There are numerous unique characters for you to discover in Sandrock, all with complex personalities and intricate backstories. Many of them can be romanced, and almost all of them can be befriended to unlock quests that will reveal their hopes, dreams, and personal goals, or maybe just a fun storyline to achieve something together with that character. We’ve written a new AI system for this game so that the characters will behave more “alive” than in My Time at Portia. For example, we’re planning to have the NPCs interact with each other more instead of keep to themselves like they do in Portia.

Speaking of Portia! Being that Sandrock and Portia are neighboring cities, it seems more than likely a few familiar faces will be stopping in, though we can’t exactly confirm who that will be yet…