Fight side-by-side with your friends. 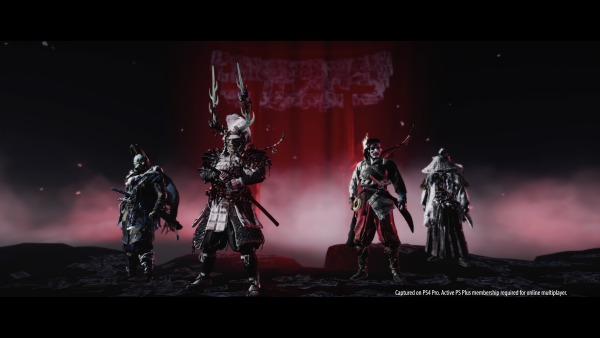 Get the details below, via Sucker Punch Productions senior game designer Darren Bridges on the PlayStation Blog.

As we announced in August, Ghost of Tsushima: Legends is a brand new, online cooperative multiplayer experience that will be a free update for all Ghost of Tsushima owners. A classic element of some of our favorite samurai films is warriors standing together, ready to fight as a team. In Ghost of Tsushima: Legends, you can fight side-by-side with your friends, which is such an important part of fulfilling that samurai fantasy in a whole new way. We’re so excited to hear from everyone who teams up with their friends and jumps in. 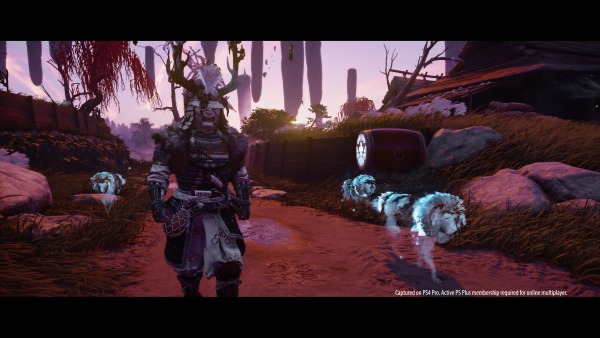 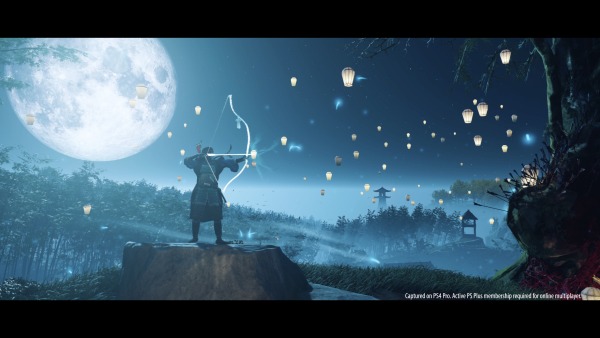 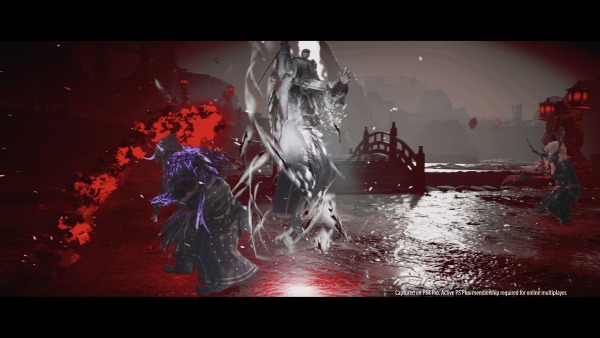 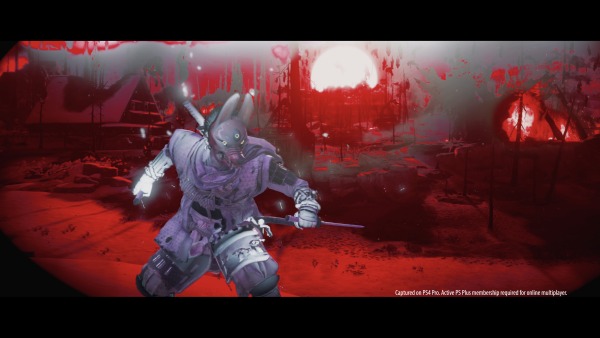 Once you have version 1.1, you’ll notice a new character at various towns and locations in Tsushima… Gyozen the Storyteller! He’s heard the rumors about the Ghost of Tsushima, but he has a different perspective about what’s actually happening in his homeland. Gyozen is the author and gatekeeper of the stories you’ll find in Ghost of Tsushima: Legends, and when you talk to him, he’ll be happy to share one of his transportative stories about the “Ghosts.” 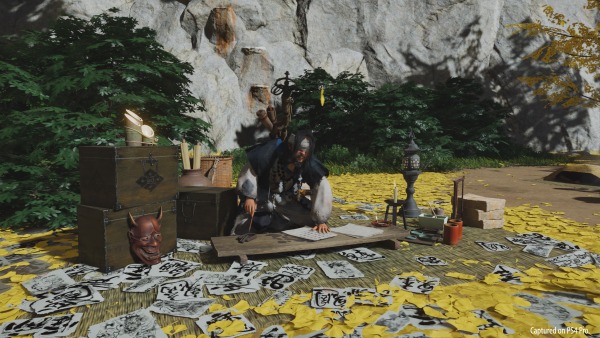 Speaking to Gyozen will give you access to the Ghost of Tsushima: Legends lobby, but you can also get there directly from the title menu or the pause menu… or by accepting a PlayStation Network invitation from a friend!

In addition to each starting with their own unique ability, each class can unlock an alternate ability as you progress, as well as earning class-specific Charms and ranged weapons.

While playing with friends, you can mix and match classes however you’d like, whether that’s a party of four all playing the same class, everyone playing as a different class, or any combination in between. 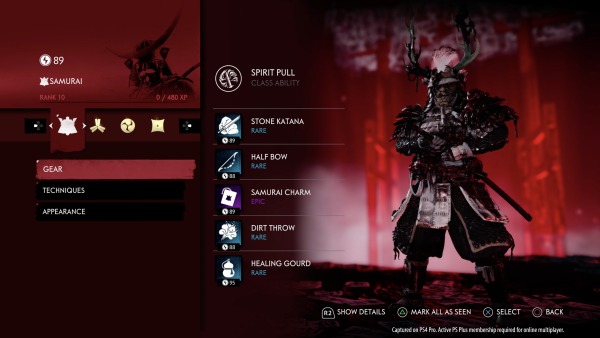 Samurai players can run straight toward combat and stay there, sustaining their health while chopping enemies down left and right. When you’re overwhelmed, use the Hachiman’s Fury ultimate attack to slash through enemies in a flurry of strikes. 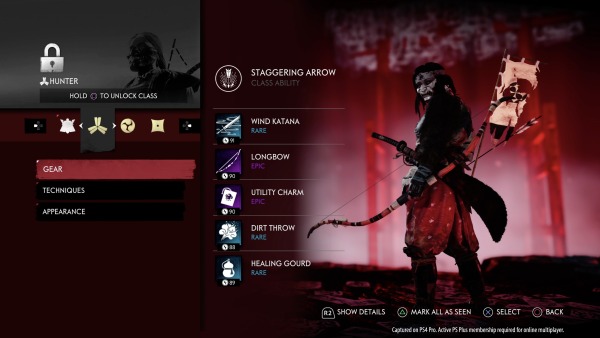 As a Hunter, you can stand on the edge of combat and snipe enemies before they even see you. You can also use explosive arrows to slow down groups, and when the combat gets really fierce, the Eye of Uchitsune ultimate attack will unleash multiple arrows straight at your enemies’ heads. 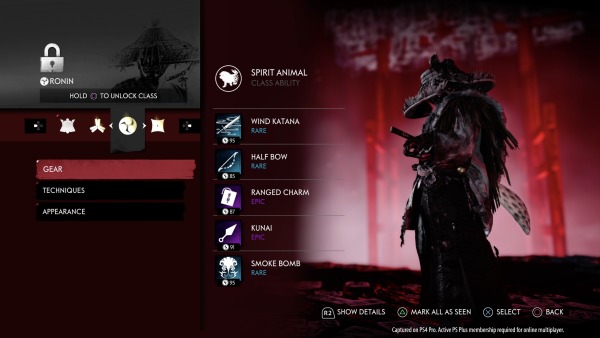 Ronin players can revive their entire team with the Breath of Izanami ultimate ability. You might play Ronin because you want to help your human friends… or you might do it because the Ronin class is also able to summon a Spirit Dog. (And yes, you can ABSOLUTELY pet your Spirit Dog!) 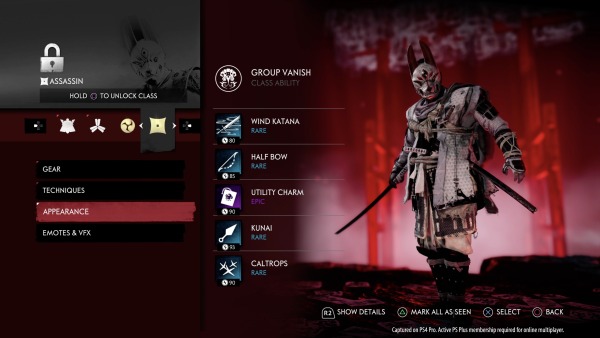 If you prefer doing massive damage with a single attack, you’ll love the Assassin. The Shadow Strike ultimate attack will allow you to teleport across the battlefield and directly strike your enemies. If that’s not intimidating enough, wait until you see the terrifying masks the Assassin gets to wear!

In Survival, you can team up with three other players to fight off waves of enemies while defending different locations in Tsushima. You and your team can activate blessings to help yourselves, like “ignite enemies” or “summon a Spirit Bear.” The longer you survive and the more bonus objectives you complete, the more rewards you’ll earn!

You’ll need all your skill, top-tier gear, and a great four-player team to be able to survive in Iyo’s realm! The Raid is an epic three-part adventure that will require excellent teamwork and communication to overcome. It will be released in the weeks following the launch of Ghost of Tsushima: Legends.

Ghost of Tsushima: Legends also has a few features you’d expect from Ghost of Tsushima. Our robust Photo Mode is still present here (as long as your teammates opt in) and you’ll be able to show off all the new masks, armor, and emotes you’ve earned. 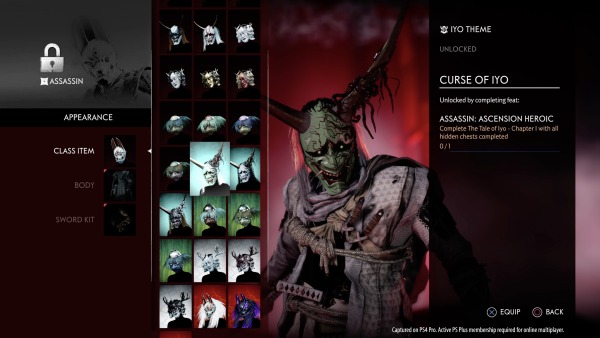 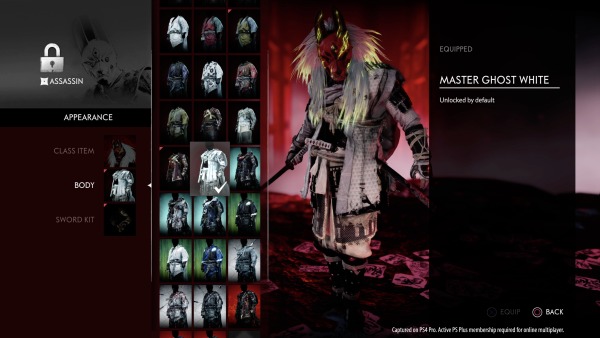 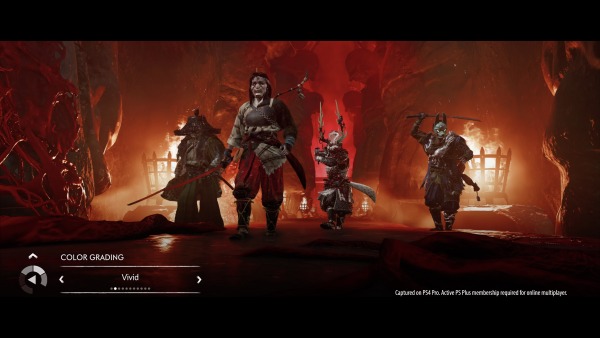 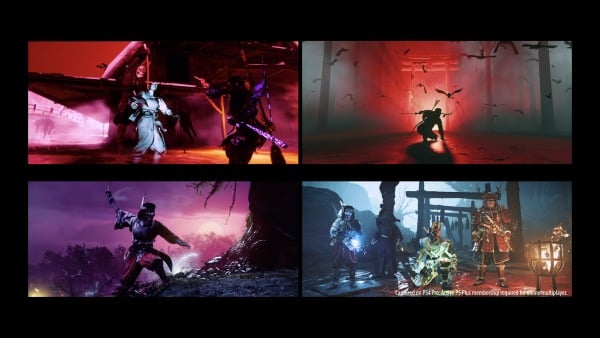 Legends is packed with new cosmetics, and they’re all unlocked through gameplay without any microtransactions. Looking cool is important, but Ghost of Tsushima: Legends gameplay progression really centers around the gear you’ve equipped and the techniques you’ve unlocked. You’ll be rewarded with increasingly rare and powerful gear as you take on greater challenges, and you’ll unlock new techniques as you gain experience with each class.

If you’ve already beaten Ghost of Tsushima, you’ll find the option to re-embark on Jin’s Journey in New Game+. You’ll start New Game+ from the release to the open world, shortly after Jin’s initial confrontation with the Khan. You’ll keep all of the Techniques, Gear, and Vanity items obtained in a previous playthrough, and difficulty will be increased to provide a new challenge (but you can still adjust it down in the menu). 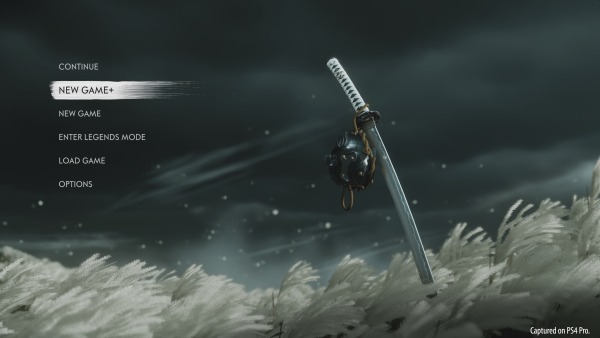 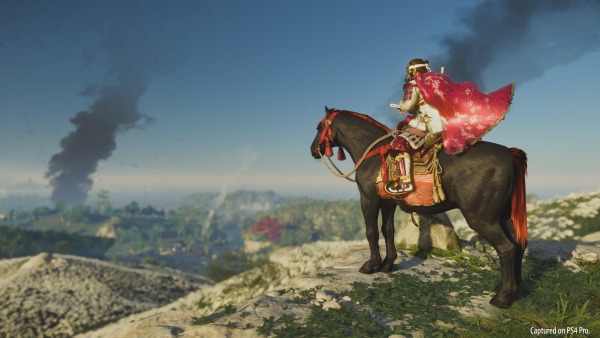 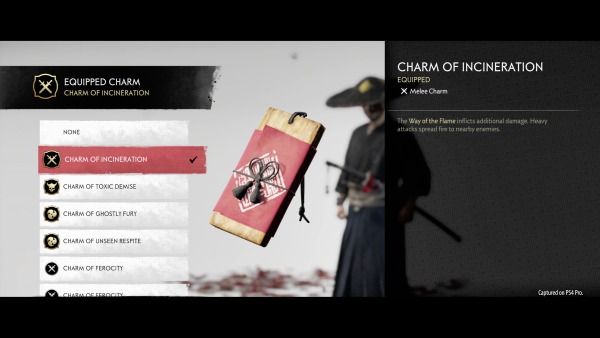 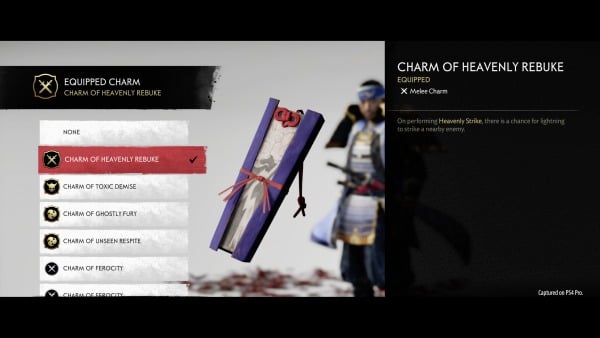 You’ll also find yourself with a brand new New Game+ horse, which features a vibrant red mane and unique saddle. There are also new, extremely powerful Charms available that can help Jin unleash devastating attacks and may change the way you play. You’ll also be able to unlock an additional upgrade for your sword, bow, and armor.

We’ve also added some new Trophies for playing Ghost of Tsushima on New Game+, which will appear in a separate section of your Trophy list and do not count toward Ghost of Tsushima’s Platinum Trophy. 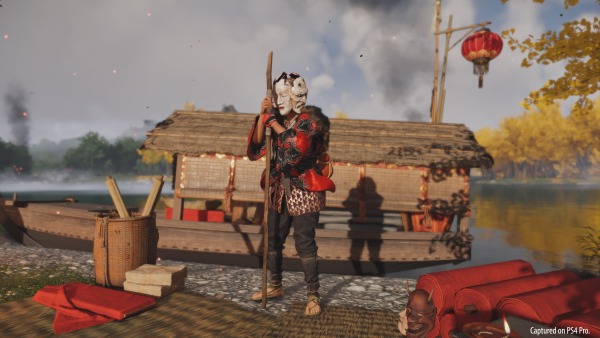 Exclusively in New Game+, you’ll be able to earn a new type of flower: the Ghost Flower. This new type of flower can only be earned in New Game+, and is accepted by a mysterious new merchant that you’ll find in Ariake. If you complete a Tale or activity and already have the reward, you’ll earn Ghost Flowers in its place, so even if you’ve completed Jin’s journey before, it’s still exciting to explore Tsushima once again to collect as many Ghost Flowers as you can.

You can exchange these flowers for new armor dyes and other vanity gear only found in New Game+, featuring much more elaborate designs than those found in your first playthrough. 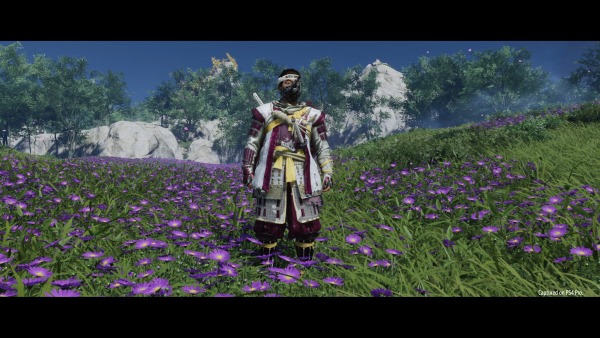 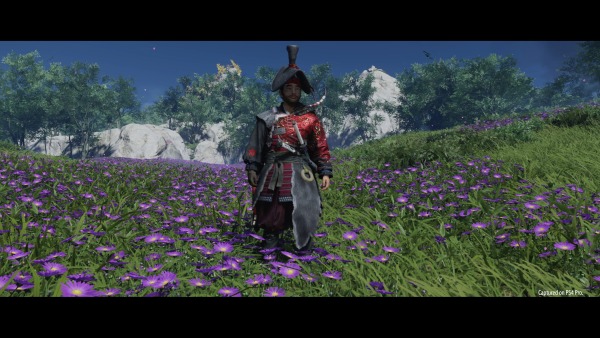 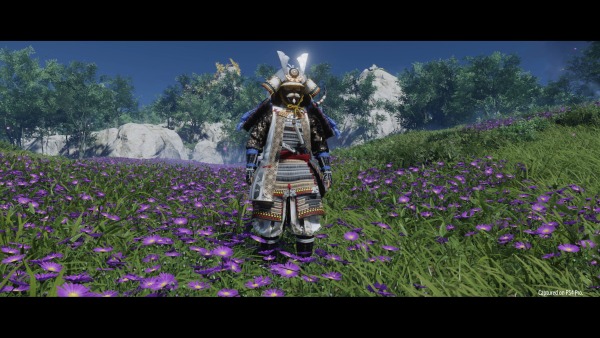 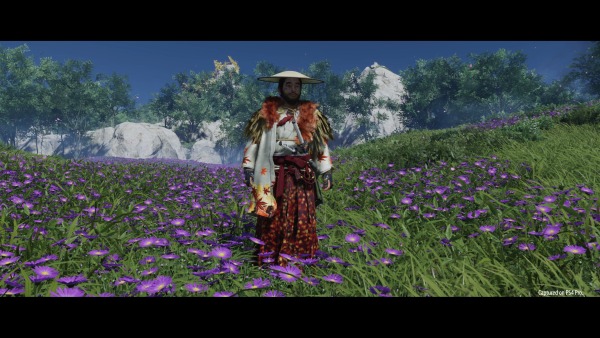 The merchant will also offer an array of powerful new Charms intended to create new combat experiences, empower existing playstyles, and allow you to customize your experience for even greater challenges!

Once you’ve installed version 1.1, you’ll now find the option to enable Armor Loadouts, which allow you to assign all Charms and vanity items to each armor set to quickly swap between loadouts to match your playstyle and roleplaying preferences. 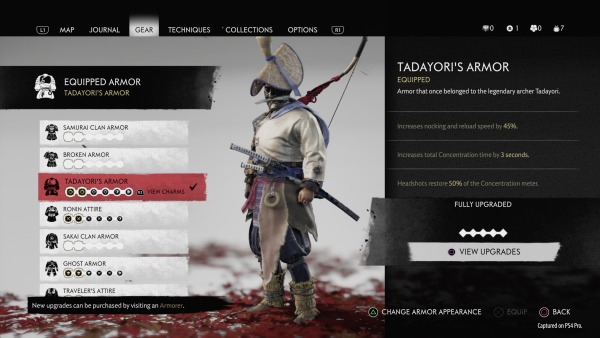 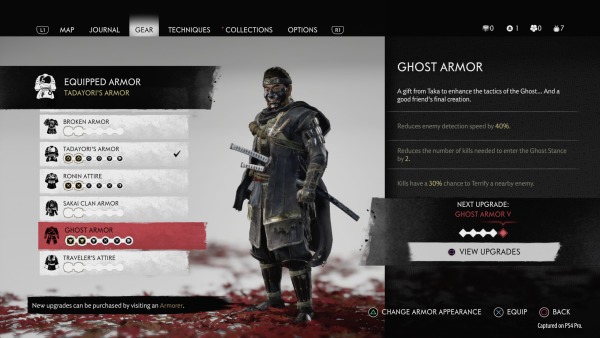 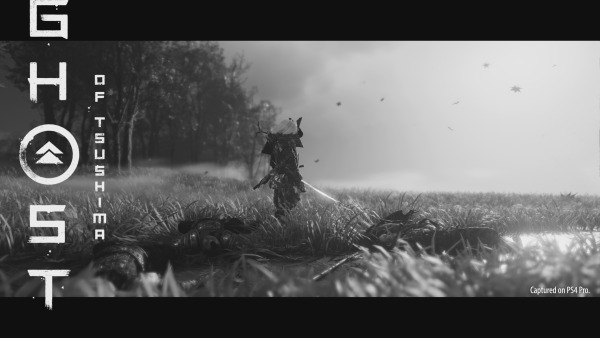 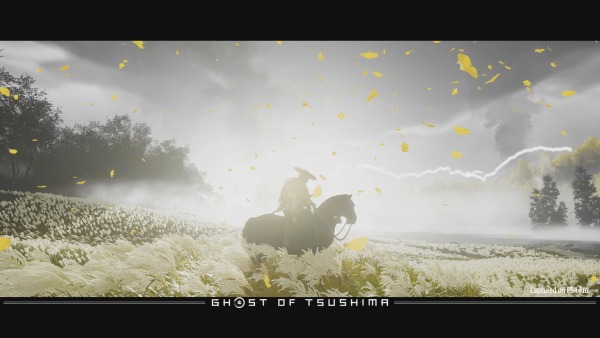 You’ll also find that your total play time is now displayed when you select a saved game file to load, and new options have been added to Photo Mode.

These features will apply to your existing game, or to a New Game + playthrough.

Watch the version 1.1 update trailer below. View a new set of screenshots at the gallery.