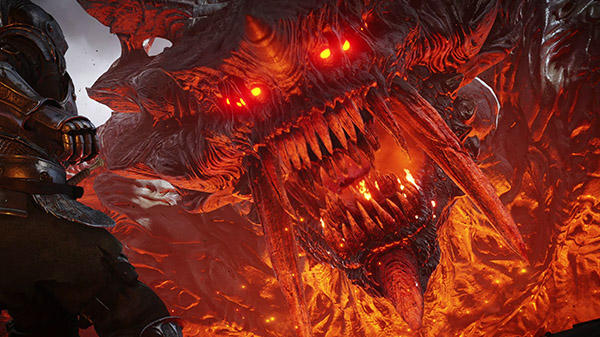 The music of the Demon’s Souls remake has been reimagined and re-recorded as performed by a 75-piece orchestra, a 40-person choir, and multiple vocal and instrumental soloists.

Only when you face your greatest challenges, the horrific and terrifying bosses, does music burst onto the scene, creating the backdrop to an epic encounter. The music defines these unforgettable moments.

It’s not only the music that defines this world, but also the incredible characters that inhabit it. Some good, some bad, but all with a tale to tell. We were lucky enough to get many of our original voice cast back to take on their iconic roles, with all dialogue being rerecorded. It will be great to see players of the original game falling in love with their favorite characters and voices all over again.

Countless hours were spent adding thousands upon thousands of new sounds to the game, really bringing this world to life. These are the sounds of Boletaria that will disturb your dreams. Will you go mad from the incessant beating of the heart and the haunting singing in the Tower of Latria? And how many of you will find courage in the face of the skin-crawling skitterings of the Armored Spider deep in the belly of Stonefang?

Perhaps that courage will come from the music. We lavished as much attention to this as the game’s soundscape. We reimagined the original score by Shunsuke Kida, creating dramatic new arrangements of his wonderful themes. Everything was rerecorded at Air Studios in London, with a world-class orchestra and choir. You can even hear the famous pipe organ at Temple Church that adds a haunting backdrop to many of the tracks. 120 of the finest musicians in the world perform on this score. And we’re incredibly proud of it.

Sony Interactive Entertainment also confirmed it will release the soundtrack to the Demon’s Souls remake on digital platforms on November 26, followed by a CD release by Milan Records shortly after. Pre-orders for a vinyl will open in early December.

Watch the developer diary and listen the the “Flamelurker” track below.

The Music of Demon’s Souls

PlayStation Now adds Injustice 2, RAGE 2, Kingdom Come: Deliverance, and more on November 3 Previous post
Praey for the Gods launches in Q1 2021 for PS5, PS4, Xbox One, and PC Next post

SwordArts ⋅ PS5 shortages expected to continue into 2022 ⋅ 41 seconds ago