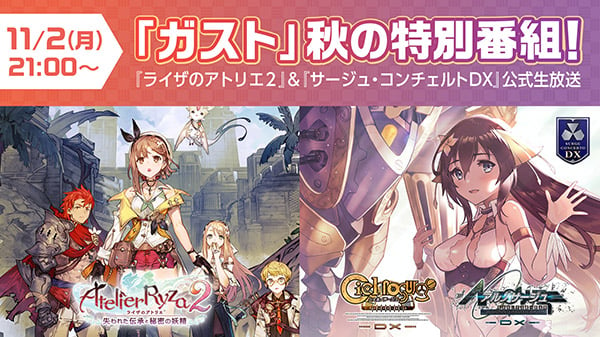 Publisher Koei Tecmo and developer Gust will host an Atelier Ryza 2: Lost Legends & the Secret Fairy and Surge Concerto DX (Ciel nosurge: Requiem for a Lost Star DX and Ar nosurge: Ode to an Unborn Star DX) official live stream on November 2 at 21:00 JST, the companies announced. You will be able to watch it on YouTube and Niconico.

The Atelier Ryza 2: Lost Legends & the Secret Fairy part of the live stream will feature the latest footage and gameplay, as well as detailed information on the download version. The Surge Concerto DX part will feature the first-ever live gameplay, as well a a look at the items included in the deluxe editions and latest footage. Presenters include Yuri Noguchi (Reisalin “Ryza” Stout voice actor) and Ai Kakuma (Ionasal.kkll.Preciel voice actor).

Ciel nosurge: Requiem for a Lost Star DX and Ar nosurge: Ode to an Unborn Star DX are due out for PlayStation 4, Switch, and PC via Steam on January 28, 2021 in Japan.