PlayStation 4 and PC versions not yet dated. 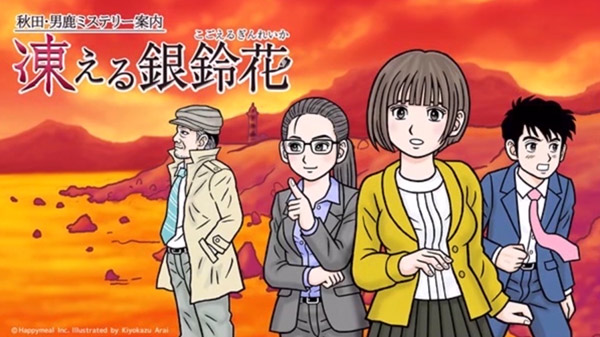 In Akita Oga Mystery Guide: The Frozen Silverbell Flower, the player is a detective in pursuit of the truth behind a case of serial murders together with their partner, a younger detective named Ken Kaimeiji. Character design is by Kiyokazu Arai, who also designed the characters for the first game. The game features a variety of unique characters such as Akita’s ace detective Kisaragi, soon-to-retire veteran detective Shigeki, Akita’s mysterious beauty Rin, and more.

Kuramae, Tokyo. On the trail of a leading member of a crime group that has been expanding its influence, the player and their partner, a younger detective, succeed charging in and making the arrest following a stakeout. When the location of the boss’s hideout comes out, the pair head to Akita.

However, they discover the apparent mastermind they tracked down to be the victim of a dreadful murder. Was it internal discord? Revenge? The confusing investigation will eventually lead to the truth of this tragic and mysterious case.

Sasuke Pinckney ⋅ The King of Fighters XV reveal trailer set for January 7, 2021 ⋅ one minute ago

WTFISTHISSHIT? ⋅ Re:ZERO – Starting Life in Another World: The Prophecy of the Throne digital pre-orders now available, English voice cast announced ⋅ one minute ago