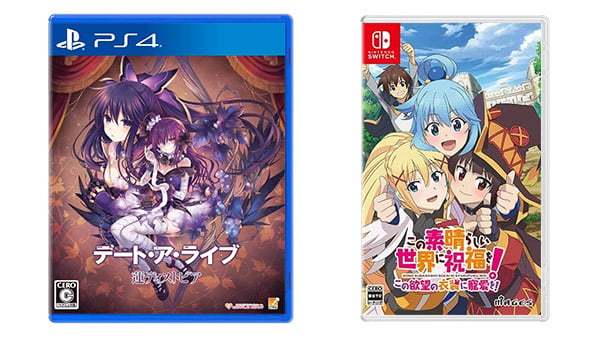 Date A Live: Ren Dystopia for PlayStation 4, and KonoSuba: God’s Blessing on this Wonderful World! Love for this Tempting Attire for PlayStation 4 and Switch are the highlights of this week’s Japanese video game releases.

The latest entry in Compile Heart’s romance visual novel series, Date A Live: Ren Dystopia features a game-original story written by series author Koushi Tachibana and original characters designed by Tsunako. Set after the events of the 11th light novel, protagonist Shido Itsuka has a strange dream and wakes up with an unknown box and picture of a snake placed at his bedside. And then he opens the box…

KonoSuba: God’s Blessing on this Wonderful World! Love for this Tempting Attire is the second entry in the Mages.-developed series of KonoSuba visual novels. It follows a game-original story in which protagonist Kazuma must break “a curse that makes one’s desires the exact opposite” that has afflicted Darkness, Megumin, and Aqua, by creating outfits that fulfill their desires. To do so, Kazuma will need to take on various jobs and quests to gather the proper materials.