Spark returns as the protagonist for newly announced sequel. 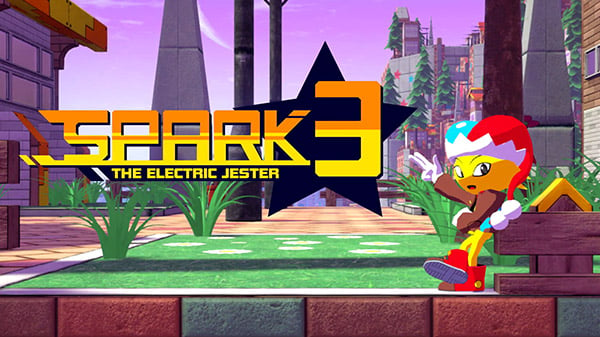 Feperd Games has announced 3D action platformer sequel Spark the Electric Jester 3 for PC. A release date was not announced.

Spark the Electric Jester 3 is an action platformer with plenty of speed and action. Featuring many colorful and action-packed stages.

Will this game be on consoles?

First, it will come to PC, then we will see if we can port it to other consoles. The thing about console ports is that it’s not up to us but up to the console manufacturers to allow us to make a console version. So, we will do our best to port to as many viable platforms as we can.

Spark the Electric Jester 2 featured Fark, his robotic doppelganger, as the main character because I wasn’t comfortable with translating the character of Spark to 3D yet. Now I am more than capable of that so he is fully playable.

Will there be other Jester Powers like the previous games?

Right now, there is only one power, the Electric Jester, and this power can be upgraded in the shop with new moves and special attacks, which now use the d-pad. Other Jester powers are still in the conceptual phase and any of what I say here could change but, the plan is to feature at least a couple in a unique way. They should be unlockable this time, and will also have unique moves and special powers that can be bought in the game’s store.

What’s new in comparison to Spark the Electric Jester 2?

A lot has changed, the game is a little more restrained now, Spark cannot jump as high as fark or go as unreasonably fast as he did in the previous game. But this means that the game can have more focused platforming challenges, and it means that the new moves, like being able to walk on walls, are now necessary to progress effectively.

Changes to the combat.

The combat has changed drastically compared to the second game. The game now features a combo meter that increases your base damage the higher it is. To increase the combo meter, you must mix up your attacks. As repeatedly using a single one won’t fill it up. It is also possible now to juggle enemies in the air for long periods of time, including bosses.

How many stages will it have?

The game will feature less stages then the previous game, however, each stage is now longer and they will all feature several unique side stages that are required for game completion. Overall, the game will likely have more content than the previous but with better overall re-use of resources. Side stages might even be totally new content depending on what’s possible to do with them.