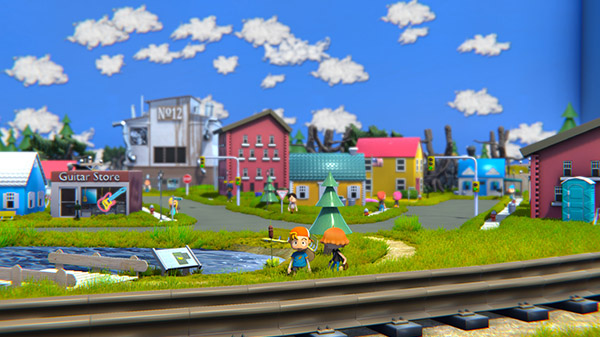 Role-playing rhythm adventure game Starstruck: Hands of Time will be available for PlayStation 4 in addition to its previously announced PC (Steam) version when it launches in 2021, developer Createdelic announced. A demo is currently available for PC via Steam.

Starstruck: Hands of Time is a story-rich, genre-defying roleplaying rhythm adventure where you play guitar and explore a miniature diorama world as two guitarist claymation kids, and then help them progress by rampaging around their city as a giant destructive time-travelling hand. Race against time together as all three protagonists to rewrite history and defeat “The Mold.”

In 30XX, Earth is no more. In its place, a repressed façade corrupted by a mysterious force called “The Mold” lingers. To save the world, a moon colonist travels back in time 1000 years to a pivotal moment in Earth’s history, armed only with their own hand, a charming spaceship computer, and the knowledge two children in this time period are critically important to Earth’s history.

Play Along to the Rhythm

Explore a miniature diorama world as Edwin and Dawn, two musical children whose stories are bound to the fate of the planet. Play guitar to a genre-spanning original soundtrack, from prog rock and metal to pop ballads, featuring live instrumentals and vocals. Strum along to their epic musical journey in a story about idolization and following your own path.

Reach into the lives of Edwin and Dawn with a giant, rampaging human hand — your own! Stomp around their city as a giant disembodied hand, solving puzzles as the omnipresent moon colonist. Open new paths, remove obstacles, and change their world to save your own. Switch perspectives between all three protagonists to uncover the truth of what happened to Earth and change the future.