Upgrade to next-generation versions at no additional cost. 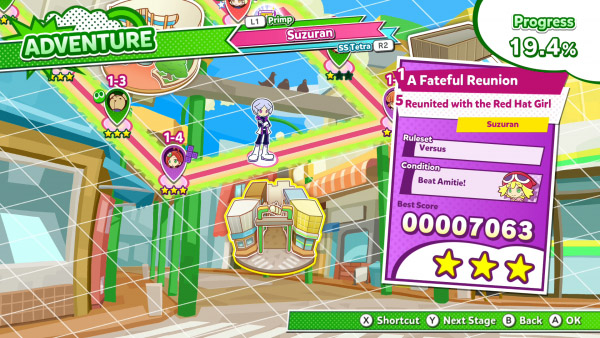 Reunite with Ringo, Tee, and a lovable cast of returning and new characters from Puyo Puyo Tetris for a new journey! The worlds of Puyo Puyo and Tetris have merged thanks to a mysteriously powerful being known as the Dimensional Parasite. With this threat looming, Ringo, Tee, and friends must traverse the world to pop Puyos and clear Tetriminos to rescue their pals from a dark corruption. But they’ll quickly learn that there’s more to their quest than meets the eye when they face the Dimensional Parasite, with new mysteries and clues to uncover as their out-of-this-world journey unfolds.

As a reunion of two puzzle legends, Puyo Puyo Tetris 2 features a brand-new story that brings together the game’s vibrant cast and various gameplay modes for players to explore. With a new overworld map to navigate, new special mission conditions, and a progression system during the new Skill Battles, Adventure Mode brings a whole new layer of depth to the game’s campaign.

Boost your strategy and power your team in Puyo Puyo Tetris 2‘s brand-new Skill Battle mode with a pack of eight in-game rare Item Cards–including three special cards featuring items from the Sonic the Hedgehog series! This pack is exclusive to the Puyo Puyo Tetris 2 Launch Edition. The Puyo Puyo Tetris 2 physical Launch Edition is available for pre-order now on Nintendo Switch, PlayStation 5, PlayStation 4, and the Xbox One family of devices, including Xbox Series X, for $39.99. More information on digital pre-order and the game’s Steam release will be announced at a later date.

Puyo Puyo Tetris 2 will support Xbox Series X Smart Delivery immediately on release, ensuring players only have to buy the game once and will be able to play it on their favorite Xbox console. Additionally, buy the digital PlayStation 4 version from PlayStation Store or the physical version from a retailer and play the PlayStation 5 version at no extra cost when the game launches.

Puyo Puyo Tetris 2 is due out for Xbox Series X, PlayStation 4, Xbox One, and Switch on December 8, PlayStation 5 this holiday, and PC via Steam in early 2021.

Aaron Rodriguez ⋅ Atelier Sophie 2: The Alchemist of the Mysterious Dream rated in Australia ⋅ 3 minutes ago

MarthKoopa ⋅ Atelier Sophie 2: The Alchemist of the Mysterious Dream rated in Australia ⋅ 5 minutes ago

Sieghardt ⋅ Atelier Sophie 2: The Alchemist of the Mysterious Dream rated in Australia ⋅ 11 minutes ago

Kevin David ⋅ Atelier Sophie 2: The Alchemist of the Mysterious Dream rated in Australia ⋅ 11 minutes ago