Monster World IV remake due out in early 2021. 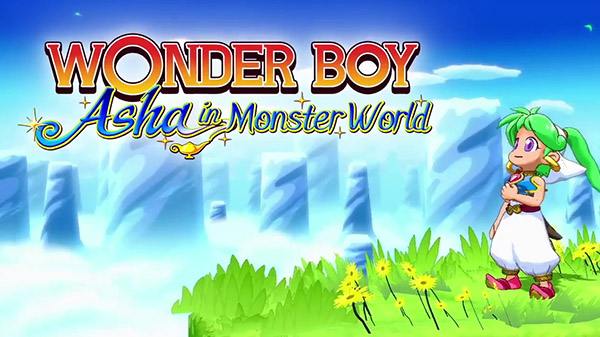 Wonder Boy: Asha in Monster World is a platform action game and full remake of the Genesis version of Monster World IV, which was developed by Westone Bit Entertainment and released by Sega as the final entry in the Wonder Boy series in 1994.

This is Monster World. The protagonist Asha, who just became a warrior, gets wrapped up in a major event involving the survival of her kingdom. The invaders trying to take possession of this world have captured the four Spirits. Asha, under Queen Purapril’s decree to save the spirits, sets off on an adventure with the mysterious creature Pepelogoo she met in the capital capital Rapadanga. With Pepelogoo’s help, Asha overcomes difficulties time and time again. Will these two two really be able to save the world?

Wonder Boy: Asha in Monster World features various actions that utilize the mysterious creature Pepelogoo. Players can enjoy unique actions prepared for each environment, including gliding or double-jumping by holding onto Pepelogoo, or pressing faraway switches.

By defeating the enemies you encounter during your adventure, you can receive GOLD. By going to the shop in Rapadanga City, you can spend GOLD to purchase equipment items such as swords, shields, and bangles. Strengthen Asha’s equipment to be prepared for the gradually more difficult enemies Asha will face.

About the Wonder Boy Series

In recent years, the Wonder Boy series has seen various remakes and been a global smash hit, and Wonder Boy: Asha in Monster World is a response to the rising expectations from fans for a Monster Hunter World IV remake.

A Full Remake of Monster World IV for the Modern Day

Wonder Boy: Asha in Monster World is a full remake of the 2D side-scrolling action game Monster World IV with full 3D graphics, significantly enhanced visuals, and further refined gameplay. It is not just visual change, as new game modes and other additional elements are planned. It is also the first entry in the series to feature voice-overs. Look forward to hearing what Asha’s voice!

For this remake, the original staff from Westone Bit Entertainment have reunited under the supervision of Wonder Boy series creator Ryuichi Nishizawa.

Wonder Boy: Asha in Monster World is due out for PlayStation 4, Switch, and PC via Steam in early 2021 worldwide.

visit gallery »
'Soulslike Metroidvania' GRIME coming to PC, other platforms in 2021 Previous post
AWAY: The Survival Series launches in early 2021 Next post