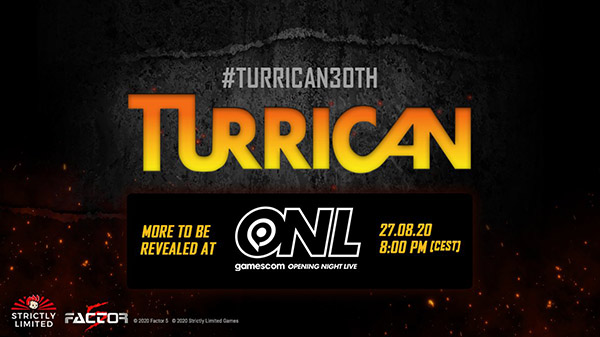 Strictly Limited Games is partnering with the original development team behind the 1990-released Turrican to release a “special 30th birthday edition” of the game, the publisher announced.

“After three decades in dormancy, we welcome the return of a true legend,” Strictly Limited Games said in a press release. “Developed by one of Europe’s greatest independent studios of all time, Factor 5’s Turrican series became one of the most acclaimed and well regarded video games of all time shortly after its release in 1990. Now, teaming up with the original development team, Strictly Limited Games is excited to bring back this legendary IP.”

An exclusive trailer and more about the 30th brithday edition will be announced during the Gamescom 2020: Opening Night Live stream on August 27 at 11:00 a.m. PT / 2:00 p.m. ET, which you will be able to watch on YouTube and Twitch. After the reveal, Strictly Limited Games will open pre-orders for the exclusive and limited editions via its online store.