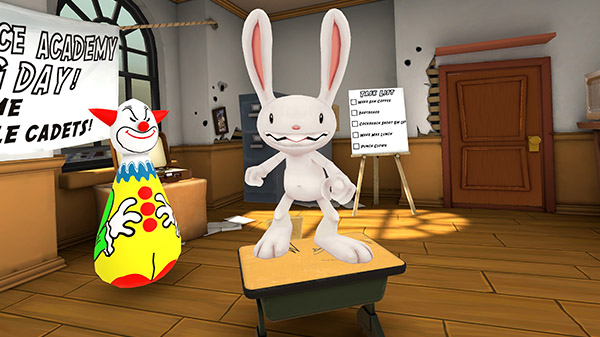 HappyGiant has shared more information and first screenshots for the newly announced Sam & Max game Sam & Max: This Time It’s Virtual!, which will launch for unspecified virtual reality headsets in 2021.

“Decades ahead of the curve, we spoofed what Sam & Max VR might be like,” said Sam & Max series creator Steve Purcell in a perss release. “Now, finally we can really step into their world. HappyGiant is doing an amazing job capturing the flavor of Sam & Max’s bizarre universe. After drawing these characters for so long, it’s mind-blowing to finally walk through the door and actually interact with Sam & Max in VR.”

HappyGiant CEO Mike Levine added, “It’s like deja vu all over again. To be working with Steve again, as well as Peter, Mike, and Bay Area Sound, is insanely cool, humbling, and just plain weird, after so much time has passed.”

Here is an overview of the game, via HappyGiant:

Sam & Max: This Time It’s Virtual! is the Freelance Police’s first original game in over a decade, and the pair’s first foray into virtual reality. The game’s development team includes several team members that worked on the original Sam & Max: Hit the Road by LucasArts in 1992, as well as the Telltale series. The new action adventure title is slated to come out for virtual reality headsets in the first half of 2021.

For the first time ever, gamers will play not as Sam and Max, but alongside them, in virtual reality. Players will be recruited and trained as one of the few, the proud, the miscreant Freelance Police. As a new cadet, the player will be put through a series of graded courses set up by the duo inside an abandoned theme park, which probably harbors a dark and dangerous secret. As players progress, they’ll put their new skills to the test in Sam and Max’s neighborhood, as well as other locales that defy description (well, not really, we just don’t want to tell you about them yet!).

Fans will be happy to learn that HappyGiant has assembled an all-star team of Sam & Max veterans to help them develop the game. Steve Purcell, the creator of Sam & Max, is consulting on the game design, art, and story. Other team members include renowned concept artist Peter Chan, writer and designer Mike Stemmle, and Bay Area Sound. David Nowlin and Dave Boat are returning to voice Sam and Max.