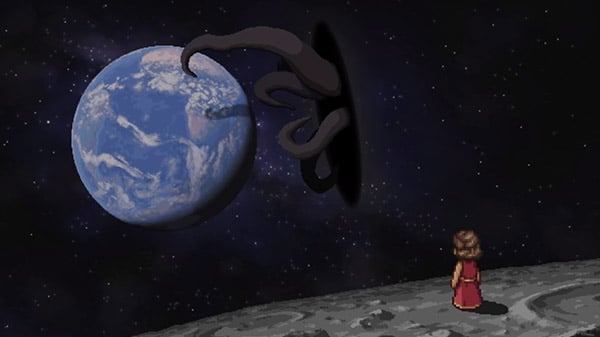 Freebird Games has released the official trailer for Impostor Factory, its November 2019-announced third entry in the To the Moon series following the original game and sequel Finding Paradise.

Impostor Factory is a narrative-driven adventure game that is categorically out of its mind.

Dr. Rosalene and Dr. Watts have peculiar jobs: They give people another chance to live their lives, all the way from the very beginning.

But this isn’t their story. Probably.

Instead, it’s about Quincy. Let me tell you a story about him.

One day, Quincy was invited to a fancy parteh at a suspiciously secluded mansion. So he accepted and went; because even though the mansion was suspicious and secluded, it was also fancy and had a parteh.

In fact, it turned out to be so fancy that there was a time machine in its bathroom. Quincy could wash his hands and time-travel while he was at it. Talk about a time-saver!

But of course, then people start dying, because that’s what they do. And somewhere along the way, things get a little Lovecraftian and tentacles are involved.

Anyway, that’s around one-third of what the game is really about.

Impostor Factory is due out for PC via Steam at the end of 2020. (According to Freebird Games, “[It’s] supposed to be due end of 2020. But raccoons pooped in our office last night so I dunno.”)

Pilebunker ⋅ Dokapon UP! Mugen no Roulette debut trailer ⋅ one minute ago