Re-experience the classic arcade gameplay of the 90s. 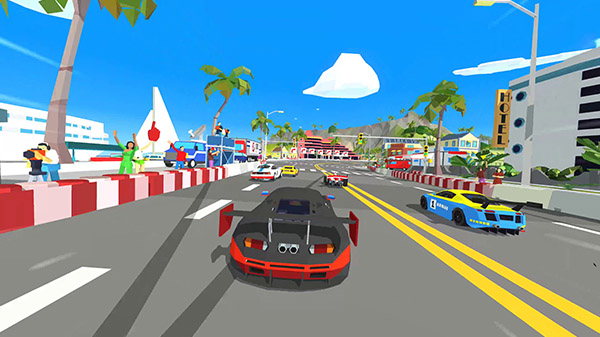 “This game has been on a massive journey for the past decade from the initial concepts to Kickstarter pitch and now on the final stretch to launch,” said Lucky Mountain Games creative director Trevor Ley in a press release. “We can’t wait to see all the in-game leaderboards light up with the fastest times from players and see multiplayer servers full to the rafters! We have plans for this game past launch as well, so it’ll be great to see what the world thinks of the game post-September 10.”

Sumo Digital Nottingham studio production director Tom Turner added, “As soon as we saw Hotshot Racing we absolutely fell in love with the concept, and working with Trevor on the game’s development has been a fruitful and joyous experience. Sumo Nottingham is known for producing some of the most beloved arcade racing experiences on the planet and we believe Hotshot Racing stands proudly side-by-side the best racing games we’ve developed.”

Here is an overview of the game, via Sumo Digital:

Developed by racing game veterans Lucky Mountain Games and Sumo Nottingham (Outrun 2, Sonic & SEGA All Stars Racing Transformed), Hotshot Racing is an all-new driving experience which revives the classic arcade gameplay of the 90s and thrusts it into the modern era. Featuring sharp retro visuals, sleek 60 frames per second gameplay on all platforms, multiple single-player championships, eight-player online game modes and four-player local split-screen play, Hotshot Racing is sure to appeal to both veteran racers and those looking for a more casual pick-up and play experience.

visit gallery »
Space Invaders Forever announced for PS4, Switch Previous post
Bubble Bobble 4 Friends: The Baron is Back launches for PS4, Switch this fall in the west Next post