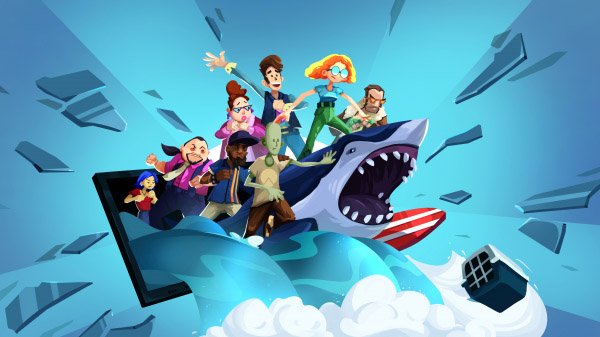 Terrible Posture Games, the studio behind Tower of Guns and Mothergunship, has announced 3 out of 10, an “episodic playable sitcom about life at the world’s worst game development studio.” The first episode, titled “Welcome to Shovelworks,” will launch today for PC via the Epic Games Store for free. Season One consists of five episodes, with a new episode due out every Thursday through September 3, all completely free.

“Look, there’s this unspoken truth in game development,” said Terrible Posture Games creative director Joe Mirabello in a press release. “Ask any game developer and you’ll get the same story. They’re working late, making art, getting up to stretch. Maybe they sneak into the kitchen to grab a snack. SUDDENLY, they realize the company fridge is inhabited by a Lovecraftian nightmare tentacle and THEN the Lead Animator spontaneously explodes (it happens, look it up) and THEN you find out someone drank all the Orange Crush. Times like that, you just gotta calm down and remember why you love this industry. And then make a game about it.”

Here is an overview of the game, via Terrible Posture Games:

Terrible Posture, creators of Tower of Guns and Mothergunship, take us behind the scenes at Shovelworks Studios, where down-on-their-luck developers have never earned a score higher than 3 out of 10. In Surfing with Sharks, an endless runner with an end, Shovelworks hopes to make their first good slightly less bad game. Over a five-week premiere season, follow a team of larger-than-life personalities in a madcap world of conspiracy, absurdity, and game development gone catastrophically awry.

In the opening episode, game animator Midge Potter shows up at Shovelworks for a job interview but gets way more than she bargained for. Before she can pull out her resume, she’s given the job—and the unenviable task of fending off overzealous fans… How will Midge calm the masses? Can she stay hidden from feral engineers? Will Shovelworks Studios ever make a game that scores higher than 3 out of 10?

Equal parts video game and animated show, 3 out of 10 keeps players guessing with eye-catching, fully voiced cutscenes and reverent nods to every conceivable genre. In this love letter to gaming and the ridiculous business surrounding it, discover new mechanics every week, from first-person shooting and racing to Episode 1’s dash dining, figure posing, and football-esque keepaway mini-games.

3 out of 10 strives for accessibility and letting players follow or replay the story at their leisure. Viewers can rewind or skip any scene or interactive segment, and upon completing an episode, can dive back into any part to re-experience it or beat their high scores. Steal a fresh look at the joys and terrors of game development, be they incapable robot office assistants, eager-to-help sacrificial interns, or the shadowy organizations unpinning the entire industry (and their shadowy fashion accessories).