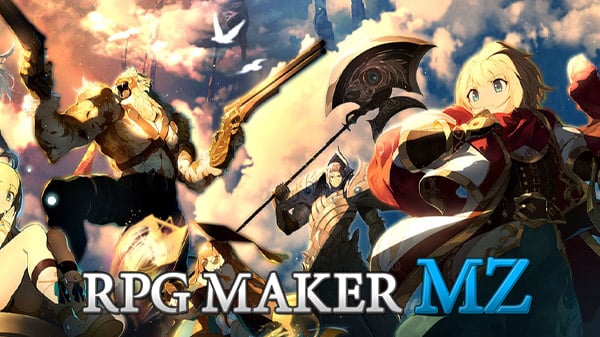 RPG Maker has a long history of letting anyone, regardless of skill level, make a game. And in Summer 2020, the latest and most powerful version, RPG Maker MZ will be available to help you make YOUR game.

With new features and enhancements to older features, this RPG Maker is set to become the best RPG Maker to date!

With RPG Maker‘s map editor, you can create maps easier than you can draw a picture. Pick the tiles you want to use, and “paint” them on to your maps. With powerful enhancements from the previous RPG Maker’s map editor, and a large collection of new tiles, you can build countless towns and dungeons for your players to explore!.

Not only can you use the included characters or import your own made completely from scratch, you can also create your own original characters using component pieces using the built in Character Generator! Combine hairs, eyes, clothes, accessories, and more. Recolor them to match your vision.

A Trove of Assets Included

From face graphics, character sprites, to map chips, character generator components, music, and sound effects, and more, RPG Maker MZ boasts the largest collection of assets out of the box than any RPG Maker in the series history!

The database is where the heart of your RPG Maker game resides. Here you store the information defining your characters, their skills, equipment, classes, but also their foes! Also in the database will be where you define many things about your game, like the names of stats, what conditions your characters can be afflicted with, battle animations, and more.

The Event system covers all the many NPCs, treasure chests, puzzles and everything else your players will interact with in your game. Using a simple system of menus, you can create a complex series of events that will drive your game to its conclusion. All with no programming knowledge required!

With RPG Maker MZ, our Animations function has been completely revamped. Easily create huge fireballs, dynamic sword slashes, or freezing winds for your characters to unleash… and suffer.

Due to popular demand, we have now included support for particle effects using Effekseer*, an open source particle effect creation tool! With this new feature, you can create magnificent 2D and 3D animations without having to use clunky spritesheets, making it infinitely easier to make extremely dynamic battle animations!

Sometimes, you want to go beyond what is easy to do with eventing alone. That is when Plugins come in! Plugins are bits of code that can change almost anything in your RPG Maker game. Learn to code enough to make some yourself, or find ones made by others to bolster your game. Adding an existing plugin can be as easy as plugging it in!

RPG Maker MZ makes it much easier for users to play games!