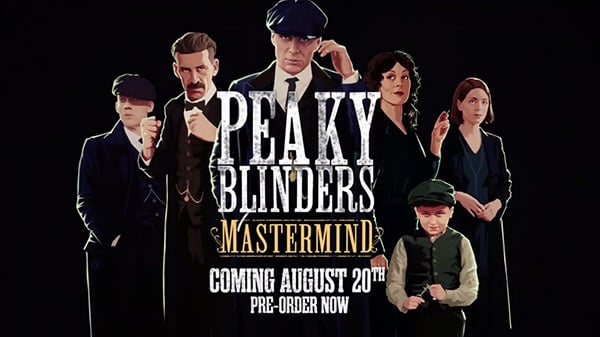 Puzzle adventure game Peaky Blinders: Mastermind will launch for PlayStation 4, Xbox One, Switch, and PC via Steam on August 20 for $24.99 / £19.99 / €24.99, publisher Curve Digital and developer FuturLab announced. Pre-orders are now available for Xbox One and PC.

“It’s been an honor to be trusted with the Peaky Blinders license,” said FuturLab game director James Marsden in a press release. “Our team has created a game that reflects the heart of what makes the show compelling: Tommy Shelby’s ability to manipulate friends, family and foes in the pursuit of his master plan.”

Peaky Blinders: Mastermind is a puzzle adventure game based on the multi-award-winning BBC and Netflix TV show.

Welcome to Birmingham, during the aftermath of the Great War. Set right before the events of Season One, Peaky Blinders: Mastermind lets you join the Shelby family’s criminal gang. Follow the rise of Tommy as he successfully uncovers a sinister plot to put the family out of business, proving himself worthy of being the true mastermind of the Peaky Blinders.

Mastermind refers to Tommy’s ability to plan complex scenarios in his head. As the player, you get to exercise this power by taking control of key members of the Shelby family including Tommy, Arthur, Polly and more. Become the Mastermind as you freely reset and rewind each character’s path in order to tune all of their actions for perfect coordination.

Napael ⋅ Epic Games Store leaks The Legend of Heroes: Trails from Zero, Trails to Azure, Trails into Reverie, and The Legend of Nayuta: Boundless Trails for the west ⋅ 37 seconds ago

backspacer ⋅ GreedFall: Gold Edition for PS5 and Xbox Series launches June 30 alongside DLC ‘The De Vespe Conspiracy’ ⋅ one minute ago

Denny Hermawan ⋅ Epic Games Store leaks The Legend of Heroes: Trails from Zero, Trails to Azure, Trails into Reverie, and The Legend of Nayuta: Boundless Trails for the west ⋅ 2 minutes ago