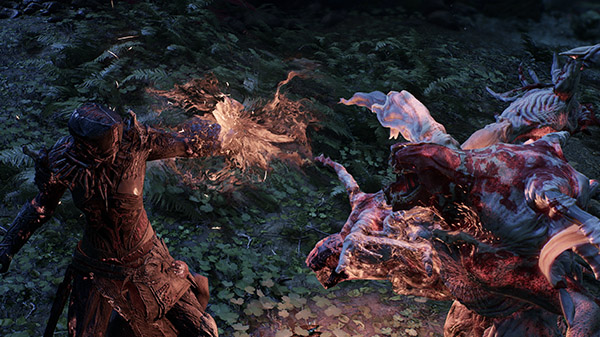 The “Journey and Structure” feature presents an in-depth look at the campaign, side-quests, companions, and travel system, as well as reveals several new environments and enemy types. Here are the latest details on the campaign, via Square Enix:

Outriders is a massive experience, not just in terms of the hours of gameplay it will offer, but in how far you travel in the course of the game’s dark sci-fi story. The campaign will take you on an epic journey across Enoch, a savage world where everything has mysteriously hyper-evolved to wipe Humanity from the face of the planet. From the lives and secrets within the Human colony, to the mysterious jungles and unforgiving deserts, you will explore the far reaches of the frontiers, gain incredible powers, and make discoveries that will change everything.

The “Pyromancer” feature introduces the Pyromancer class, including who this class is for, how the Pyromancer’s unique mechanics work, and its skills, abilitie, and passives.

The “Music of Outriders” feature reveals that the game is composed by Emmy Award Winner and three-time BAFTA nominee Inon Zur.

“As a composer it’s always extremely exciting to be involved in building new worlds and telling new stories, so I’m thrilled to reveal that I have composed the score for People Can Fly and Square Enix’s epic sci-fi action game Outriders,” Zur said in a press release. “It was a lot of fun blending heavy orchestral soundscapes and futuristic musical sound design for this roller coaster sci-fi adventure and I can’t wait to share the music with you.”

Watch the new videos below. View a new set of screenshots at the gallery.

The Music of Outriders

Gharn ⋅ Cyberpunk 2077 – ‘Lifepaths,’ ‘Behind the Music,’ and ‘Tools of Destruction’ videos, screenshots ⋅ 3 minutes ago