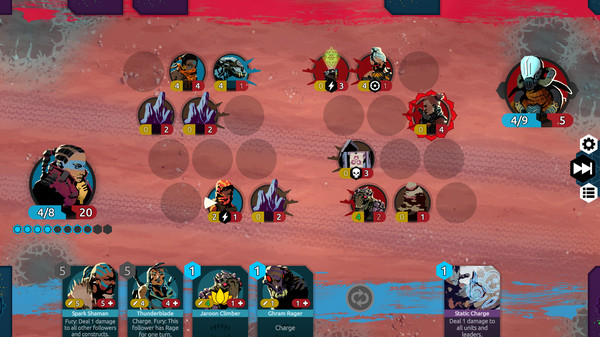 Publisher No More Robots and developer Sharkbomb Studios will release “Indian-infused digital dustpunk card game” Nowhere Prophet for Xbox One (including Xbox Game Pass for Console and PC) on July 29, and PlayStation 4 and Switch on July 30 for $24.99 / £20.99, the companies announced. Pre-orders are now available with a 25 percent-off discount.

Nowhere Prophet first launched for PC, Mac, and Linux via Steam in June 2019.

Build a loyal band of followers and survive the journey across a broken world. Barely.

Take on the role of a powerful leader and mystic. Empowered with the gifts of technopathy, the ability to sense and affect electrical currents.

You are the last hope to a band of outcasts and refugees. Lead them across the randomly-generated wastelands. Pick fights with greedy slavers and crazy machines using the turn-based card combat. Can you survive long enough to reach the mysterious Crypt?

Nowhere Prophet is a single-player card game with procedurally-generated maps, a high difficulty and permadeath. At its heart are two distinct parts of gameplay: travel and combat.

Nowhere Prophet is set on a far off planet called Soma. Your story begins many years after the Crash, a complete technological collapse. Civilization has broken down and the lack of resources made everyone turn either bandit or madman.

In this world inspired by Indian culture you lead a convoy of outcastes. These desperate men and woman following your vision of a better future. Under your guidance they travel with you through the wastelands. Your goal is the Crypt, a mystical place that promises untainted technology and safety.

If you can survive long enough to find it.

Watch the first 15 minutes on Switch below.