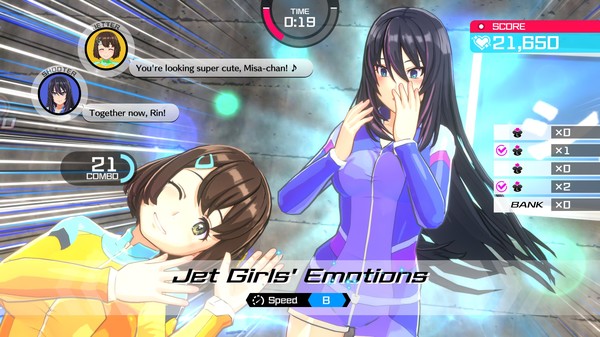 Kandagawa Jet Girls will launch for PlayStation 4 and PC via Steam on August 25 in North America, Europe, and Australia, publishers XSEED Games and Marvelous Europe announced.

In North America, the PlayStation 4 version of Kandagawa Jet Girls is currently available for pre-purchase through the XSEED Games Store and participating retailers as a day one “Racing Hearts” limited edition for $59.99, which includes the base game, two-disc soundtrack CD with 54 tracks, and a 5.5 inches by 7.3 inches softcover 64-page art book, and a special box with exclusive art illustrated by Hanaharu Naruko. It will also be available as a standalone purchase for PlayStation 4 and PC for $49.99 at launch. A Digital Deluxe Edition will also be available for $59.99.

In Europe, Kandagawa Jet Girls will be a digital-only release. The standard edition will be priced at £39.99 / €49.99 and the Digital Limited Edition for PS4 and Digital Deluxe Edition for PC will be priced at will be priced at £49.99 / €59.99. The Digital Limited Edition includes the base game, digital soundtrack application, and an avatar and theme pack. The Digital Deluxe Edition includes the base game, full soundtrack, and the Maid Bikini (Lemon Yellow) and Bunny Costume (Carrot Orange) character outfits (which will also be available to purchase separately at launch).

Here is an overview of the game, via XSEED Games and Marvelous Europe:

Jet racing is the sport of the future and the waterways of Tokyo host some of the most daring and skilled young athletes on their high-speed jet machines. Drivers, also known as ‘Jetters,’ pair up with a ‘Shooter’ armed with water weapons to blast away the competition. They must wow spectators if they want to win, building up their boost meter with spectacular aerial stunts while dodging obstacles and evading enemy attacks. Each team can be customized with various outfits, and players can get under the hood to tweak their jet machines’ parts to improve its capabilities and tweak its handling.

Pick from the seven two-girl teams, discovering each of their hopes and motivations for racing as you play through 64 episodes of lighthearted racing drama in single-player stories. Players can switch up the roles of Jetters and Shooters on each team throughout the story mode, and can pair up any two characters from any team to create their own dream team in free mode. The title features online multiplayer with support for up to four players.