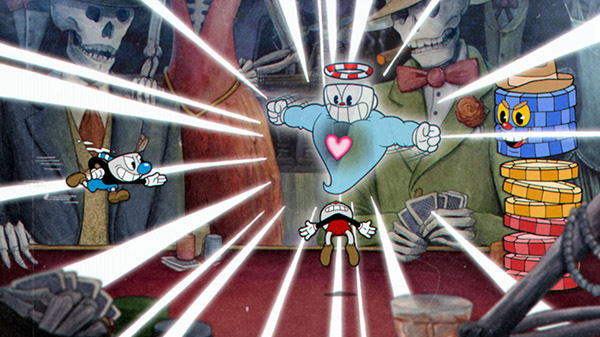 “Many of us on the team grew up exploring the worlds of classic PlayStation titles, from Resident Evil to Vandal Hearts,” said Studio MDHR co-director Chad Moldenhauer in a press release. “It’s surreal to think about players adventuring through the Inkwell Isles with a PlayStation controller in hand. To all the impassioned PlayStation fans who’ve sent us messages over the years: we’re so excited for you to get a chance to experience Cuphead firsthand. We’re also hugely thankful to the wonderful team at Xbox, who continue to empower us to bring our game and our story to new audiences.”

Studio MDHR also announced a free update for the Xbox One version of Cuphead, which will add a digital art gallery, behind-the-scenes commentary features, and playable soundtrack to the game. A release date was not announced.

While Studio MDHR did not share any new media for the upcoming downloadable content “The Delicious Last Course,” the studio’s Maja Moldenhaur said the following during an interview with Geoff Keighley: “This year kind of just threw everyone for a loop, and we’re still working hard on [the downloadable content]. In true Cuphead fashion, it’s taking us a little longer than we thought, but we want to make it a memorable experience. And to be honest, I think that we ultimately probably announced it a little bit too early based on when we actually put pencil to paper. But at the end of the day, we want it to be a fulfilling experience and live up to Cuphead, and it will come out when it’s ready.” Moldenhaur also confirmed that it will release on all platforms simultaneously.

Cuphead first launched for Xbox One and PC in September 2017, followed by Mac in October 2018 and Switch in April 2019. Here is an overview of the game, via its Steam page:

Cuphead is a classic run and gun action game heavily focused on boss battles. Inspired by cartoons of the 1930s, the visuals and audio are painstakingly created with the same techniques of the era, i.e. traditional hand drawn cel animation, watercolor backgrounds, and original jazz recordings.

Play as Cuphead or Mugman (in single player or local co-op) as you traverse strange worlds, acquire new weapons, learn powerful super moves, and discover hidden secrets while you try to pay your debt back to the devil!