Bite the Bullet launches August 13 for Switch and PC, August 14 for Xbox One

Run, gun, and eat in this roguelite RPG shooter. 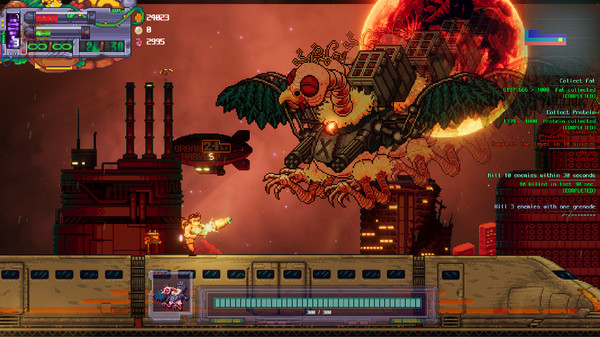 Roguelite RPG “eat ’em up” shooter Bite the Bullet will launch for Xbox One, Switch, and PC, Mac, and Linux via Steam for $14.99, publisher Graffiti Games and developer Mega Cat Studios announced.

Bite The Bullet is the world’s first run-and-gun-and-eat. In this roguelite RPG shooter, you must eat enemies, bullets and more to power-up your character, weapons, and abilities. Gun down zombies, robots and giant mutant bosses with a barrage of bullets before chowing down on their corpses to craft new weapons, unlock new abilities and special attacks, and transform into a powerful Zombro form to smash foes. Explore four character classes and a skill tree based on your diet—and remember, you are what you eat!

How you play is driven by how you choose to eat. The carnivorous Gorivore or vegan Slaughterer of the Soil that have their own unique abilities and perks, changing how you defeat enemies and navigate levels. Customize your character with every choice and every bite. Maximize your build for your playstyle, run the world again with a different diet for a new challenge, and team up with a friend in co-op to ramp up the bullets and the calories.

Star Renegades launches September 8 for PC, later in 2020 for PS4, Xbox One, and Switch Previous post
Fate/EXTRA Record - nine minutes of gameplay, 'Another Version' trailer, and new details Next post