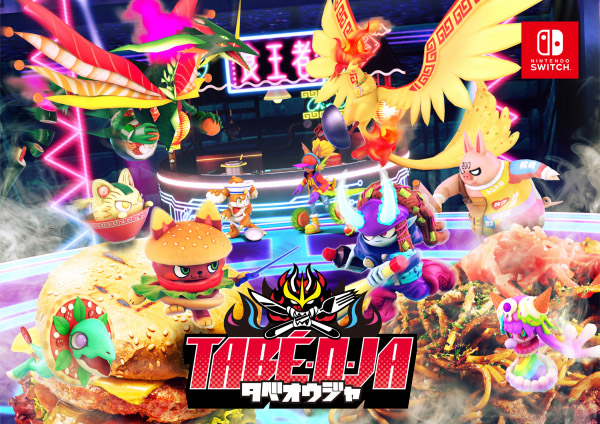 Bandai Toys has announced cooking battle action game Tabe-O-Ja for Switch. It will launch this winter in Japan.

Here is an overview of the game, via Bandai Toys:

Tabe-O-Ja is a cooking action game in which you can enjoy strategic battles. As the special chef “Tabe-O-Ja,” you will cook various dishes including Japanese, western, Chinese, and more with Joy-Con cooking actions, and summon the “Tabe-Gami” that dwell within each tasty dish. With your summoned Tabe-Gami, you can form your own original team, battle against rival chefs and their Tabe-Gami, and challenge the showdown of the cooking world: “World’s Strongest Dish.”

Tabe-Gami dwell within tasty dishes. You can summon these Tabe-Gami by using the Joy-Cons as the game indicates to complete your dish.

By completing a dish, you can summon a Tabe-Gami.

Each Tabe-Gami is themed after a dish, and their fighting ability differs depending on the performance of your cooking actions and the Tabe-Gami.

At launch, Tabe-O-Ja will feature a charming lineup of over 69 unique characters.

Furthermore, you can form a team with your summoned Tabe-Gami and battle against rival chefs.

You can summon Tabe-Gami onto the battlefield by selecting the Tabe-Gami you want to summon and performing the Joy-Con cooking actions. In battle, Tabe-Gami can use special moves by meeting certain conditions. The battle is decided when the opponent’s kitchen is destroyed.

Alexzan ⋅ Rumor: Dead Space revival in development at Motive ⋅ one minute ago

Utilisateur ⋅ Rumor: Dead Space revival in development at Motive ⋅ one minute ago