A new and improved international version of CosmicBreak.

CyberStep has announced CosmicBreak Universal, a new and improved international version of the discontinued action MMORPG CosmicBreak with revamped features, updated graphics, and a game balance overhaul. It will launch worldwide for PC via Steam in 2020 as a free-to-play title (with in-game purchases) with support for English, Japanese, and Traditional Chinese language options.

Here is an overview of the game, via CyberStep:

CosmicBreak is an action MMORPG in which players can control, customize, and battle with their very own robot. First released in Japan in 2008, the title has maintained service for more than 12 years thanks to a loyal fanbase that has continued to enjoy the high-speed, exhilarating competitive and cooperative combat offered in a wide range of environments within the game. 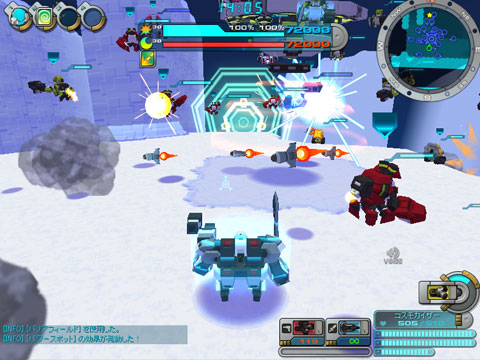 Over the years, a sizable gap has emerged between players, which has unfortunately created a restrictive gameplay environment. We believe that continuing service of the game in its current form would not satisfy the players and perpetuate the current issues, so the difficult decision has been made to conclude service for CosmicBreak on August 27th, 2020.

CosmicBreak Universal is a remastered international service made for the Steam platform that keeps the core elements of what made the original CosmicBreak unique intact, while incorporating a slew of changes that could not be implemented in the original title. Not only is this an improved version, but it will also be more widely available to players around the world.

CosmicBreak Universal will launch with a curated offering of robots and humanoids, while certain end-game content like the Core Tuning System and the Drive System will be unavailable until a later date. Such content will only be re-implemented into the game after significant adjustments have been made to them.

In addition to the above, numerous improvements have been made towards overall game balance and usability, including the simplification of status ailments, and individual adjustments to weapons and more. We believe a greater number of players will be able to enjoy the game this way. To provide an example of these changes, the Power stat on projectile weapons with a lengthy charge time will now be dramatically increased, and projectile speed across all weapons will be adjusted to prevent extreme outliers.

After twelve years of service, there is a noticeable disparity between humanoid models released at the launch of CosmicBreak, and those released more recently. In CosmicBreak Universal, we have made refinements to the character models for several humanoids that debuted near the release of CosmicBreak.

Numerous changes have been made to increase the ease of access to desired robots, humanoids, and useful items, further encouraging a fun environment for players of all ages around the world.

What can be carried over to CosmicBreak Universal?

CosmicBreak Universal will launch as a new service, so existing CosmicBreak account information unfortunately cannot be carried over. However, saved customization data such as skin data, stage editor data, and music data from KDJ-PLUS can be used once again.

*Please note that skin data cannot be applied to some Parts of the updated humanoid models.

A present package will be awarded to existing CosmicBreak players via a Present Code as a special thank you for playing the game.

CosmicBreak Universal is a free to play action MMORPG. It will launch worldwide on the Steam platform in 2020.