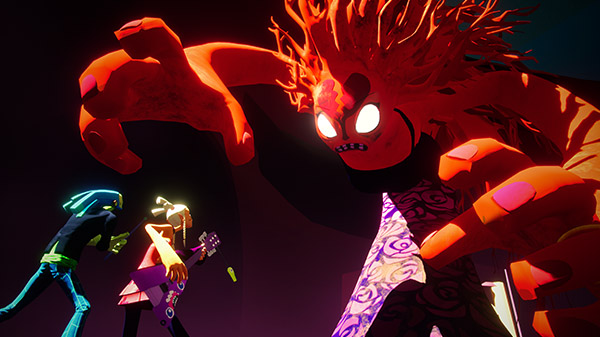 Music-based action adventure game No Straight Roads will launch for PlayStation 4, Xbox One, Switch, and PC via the Epic Games Store on August 25, publisher Sold Out and developer Metronomik announced. It will be available digitally on all platforms, and in physical standard and collector’s editions on PlayStation 4 and Xbox One, with Switch physical editions to follow “shortly after.”

A “Mother & Child Demo” is available now for PC via the Epic Games Store, featuring the boss fight presented for the first time at the Tokyo Game Show 2018.

“As a huge thank you to our loyal fans who have waited for No Straight Roads, we’ve made a playable demo available today which will give everyone an idea of what to expect with our beloved game,” said No Straight Roads creative director and Metronomik co-founder Daim Dziauddin in a press release. “We can’t wait for players to experience the full game very soon.”

A mini original soundtrack containing a selection of tracks from the game is also now available to download and stream from digital music stores and streaming services.

Take back Vinyl City—with rock! Embark on a music-based action adventure as indie rock band members Mayday and Zuke and lead a musical revolution against EDM empire No Straight Roads. After being unfairly rejected in their audition to join No Straight Roads, Mayday and Zuke uncover the evil intentions behind the NSR empire. It’s now down to them to save their city from corruption. Enjoy fast and frenetic combat with a musical twist as these two aspiring rock artists fight back with the power of music!