Voxel world Earth Defense Force due out in 2020 in Japan. 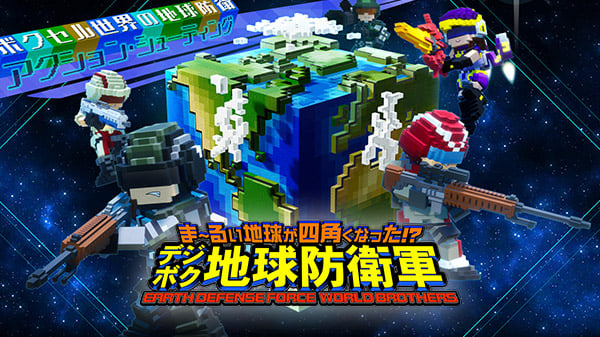 D3 Publisher and developers Sandlot and Yuke’s have announced Earth Defense Force: World Brothers for PlayStation 4 and Switch. It will launch in 2020 in Japan.

The Voxel World of a Square Earth

A new battlefield for the Earth Defense Force series appears. The setting: a square Earth. Its name: The Round Earth has Become Square!? DigiVox Earth Defense Force: World Brothers (full title). The game is set in a voxel world where everything is made of squares. In this world, the Earth is naturally also square. But this square, peaceful Earth has been shattered to pieces and is in a state of disaster. However, whether round or square, this planet is undoubtedly Earth. And so the Earth Defense Force is dispatched across the world to restore it back to its natural, peaceful state.

Save the Shattered Earth

Can anybody survive on an Earth shattered to pieces? Well, in the world of Earth Defense Force, normal everyday people are the strongest beings. The shattered pieces of Earth are still alive and waiting to be rescued.

The cities around the world and their places become the game’s stages floating in the voids of space. Since the world has shattered to pieces, there are broken Earth boundary lines (huge cliffs) at the end of each stage.

A Legendary Gathering of Soldiers

Each area of the shattered Earth awaits the help of the Earth Defense Force. Areas have not only legendary members, but also local Earth Defense Force members called “Brothers.” Liberate each area and become companions with the Brothers all over the world. You can befriend over 100 soldiers. Can you recruit the soldiers scattered all over the world to form the strongest unit?

The invading enemies are also legendary status. The enemies, massive weapons, and massive monsters from previous Earth Defense Force games have all assembled, including Invaders, Foreigners, Primers, Ravagers, and Aggressors. Their goal should have been to procure the Earth… and yet for some reason they have shattered it. Look forward to a deepening mystery.