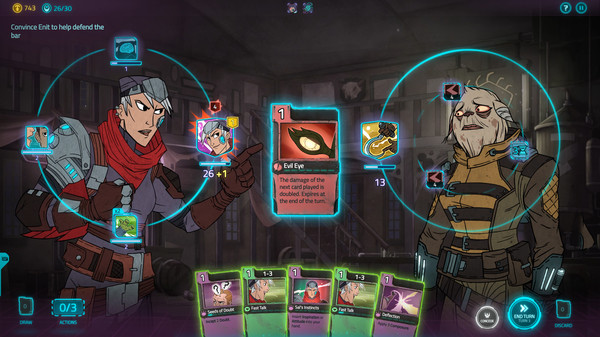 Deckbuilding rogelite Griftlands is now available for PC via Steam and the Epic Games Store in early access, developer Klei Entertainment announced. A demo is also available. The studio expects the game to remain in early access for around six to 12 months.

Compared to the early access version, the full version will have a third playable character and campaign, and existing campaigns will receive more quest variation and card content. Card balance will also be refined.

Griftlands is a deck-building rogue-like where you fight and negotiate your way through a broken-down sci-fi world. Every decision is important, be it the jobs you take, the friends you make, or the cards you collect. Death comes quickly, but each play offers new situations and strategies to explore.

At this stage of development you can play as Sal or Rook, with a third character and campaign in development. Sal is an adventurer out for profit and revenge. Rook is an aging spy working his own agenda. Expect regular updates, including new cards, quests and characters as we work on the game with community feedback!

Learn from each attempted run through the various stories of the Griftlands. Encounter different combinations of enemies, quests, and events every time you play. Your fate is determined by your choices, and by fate.