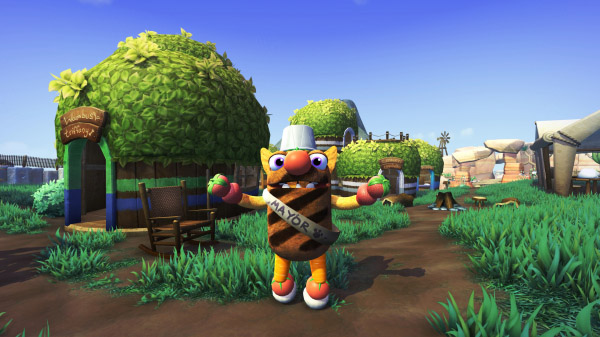 USgamer.net has published an interveiw with Young Horses co-founder and president Philip Tibitoski, who shares more information on the Octodad studio’s newly announced title Bugsnax due out for PlayStation 5, PlayStation 4, and PC via the Epic Games Store this holiday.

Bugsnax is a first-person adventure game where you play as a journalist who is sent a mysterious film from an adventurer named Elizabert Megafig, who says she has found half-snack, half-bug creatures called “Bugsnax” and wants you to document her discovery with her group of misfit followers. But when you go to Snaktooth Island, you discover Elizabert Megafig is nowhere to be found and instead run into her followers.

From there, the objective is to find out what happened to Elizabert Megafig and to study the behavior of the Bugsnax, including what happens when they are eaten. As seen in the trailer, characters’ limbs and bodies transform into foods like strawberries and curly fries when they eat Bugsnax.

The theme song for Bugsnax is performed by pop band Kero Kero Bonito. Young Horses provided the band with a playable build of the game and access to design documents, character references, and the like to make the theme song “more of a real collaboration.”

Throughout its design and testing, an estimated 100-plus people from “different backgrounds and age groups” have gone hands-on with Bugsnax. The developer is aiming for Pixar-range appeal in terms of humor and story—enjoyable for all ages, but with some jokes here and there that only older players might understand.

On PlayStation 5, Bugsnax will utilize the unique features of the DualSense controller. “Running around in the environment and feeling the different types of terrain under your feet while sprinting is really cool and weird,” Tibitoski told USgamer.net. “Past vibration in games has felt good, it’s a nice addition, but it’s never been essential, I guess. Now, it feels like it makes a big difference in the game, whether it’s running through a stream of water or, when trying to catch a Bugsnak, it being in your trap and finding “oh, is it trying to escape?” You can feel how intense it is and how close it is to escaping.”

There will be over 100 Bugsnax to study and capture, and multiple biomes on Snaktooth Island. As for how it will play, Tibitoski pointed to Ape Escape—one of the game’s inspirations—as something people can look at for an idea of what to expect.

Other inspirations for Bugsnax include Viva Pinata, Pokemon Snap, Dark Cloud, BioShock, and the movie Fern Gully given its “consideration for the environment,” but Tibitoski would not go into further detail.

More information on Bugsnax, including closer looks at individual Bugsnax, details on locales, and a gameplay trailer, will be released between now and its launch this holiday.