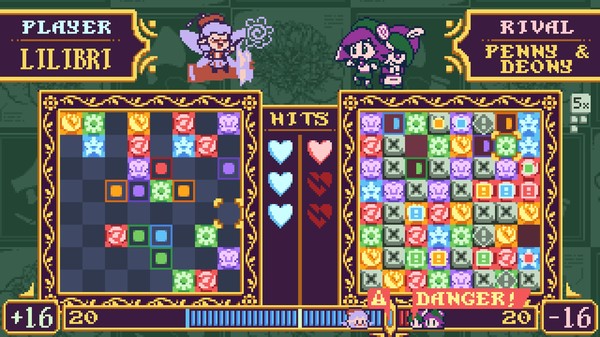 Easy to learn and rewarding to master, Petal Crash is a brand new puzzle game in the tradition of the arcade action puzzlers of the mid-90s. Like the games that inspired it, Petal Crash features a variety of single player challenges in addition to an intense head-to-head versus mode. The rules are simple—push a block any direction, and it’ll keep going until it hits a wall or another block. If it hits a block of the same color, the blocks will burst, sending any other blocks next to them flying! Line them up just right to create huge chain reactions, racking up points and burying your opponents in garbage!

Enter the land of Florea, a loosely-connected smattering of city-states where people of many different fantasy races coexist with one another. Though the land is divided, it’s said that it was once a united and prosperous country, where the people enjoyed a lasting peace presided over by the seven Sacred Blossoms, relics of great power assembled in the Royal Garden. How Florea came to be divided is lost to history, and the legend of the scattered Sacred Blossoms has turned to myth: whoever finds all seven and returns them to the Royal Garden will receive their heart’s true desire.

Eons later, the Sacred Blossoms have each fallen into the hands of a different individual: The fairy scholar Lilibri, the tiefling delinquent Strelitz, human tailor twins Penny and Deony, the dwarven treasure hunter Ore Kid, the beastkin freelancer Daize, the legendary centaur dancer Yosoti, and the errant elven knight Rosalia. Each of them has their own wish, and their own story to tell.

Challenge the Story Mode to take your chosen character through their tale, challenging all the others in fierce puzzle battles to assemble all seven Sacred Blossoms! Shoot for high scores in Solo Play, racing the clock or rationing limited moves to get the highest rank you can! Solve puzzling brain-teasers with limited moves in the Puzzle Mode, and make your own puzzles to share with friends! Challenge another player or fight the CPU in Versus Mode, racing to make clears and bury your opponent!

Rob ⋅ Higurashi When They Cry Mei debut trailer ⋅ one minute ago