Adventure platformer Reggie, His Cousin, Two Scientists and Most Likely the End of the World coming to PS4, Xbox One, and Switch 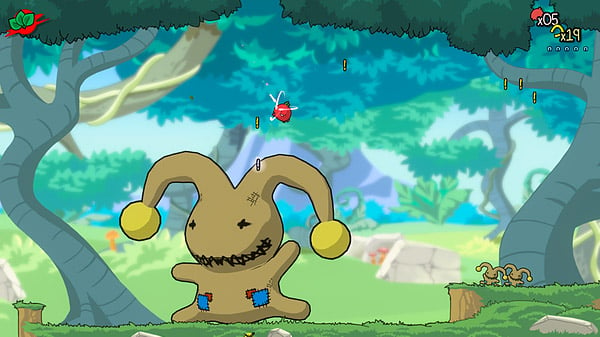 Adventure platformer Reggie, His Cousin, Two Scientists and Most Likely the End of the World will launch for PlayStation 4, Xbox One, and Switch when it releases, developer Degoma announced.

Reggie, His Cousin, Two Scientists and Most Likely the End of the World is a gravity based cartoony 2.5D cell shading platformer with a very particular storyline. You play Reggie, a little round guy from the far future which must travel back and forth in time in order to save science, and ultimately the entire Universe. In addition to the multi gravity switching mechanic, which is the fingerprint of the game, Reggie contains everything a good platformer should have (good physics, attention to detail, power-ups, collectible items, a local two-player mode, etc.)

The game starts from a solid classic platformer core (Reggie walks and jumps with a very polished physics engine), and adds brand new mechanics to it. The most important of these mechanics is the gravity switching. Gravity based games are not something new, but Reggie gives this concept a whole new meaning. While controlling Reggie, the player is able to freely invert his gravitational pull. Not just in certain areas of the game, not just for switching from floor to ceiling, but as a totally freely flowing movement at any time. Gravity switching has never been so natural before! This lack of limitation gives Reggie the ability of progressing through the air by chaining a series of swaps. We call this movement the ‘Multi-Gravity Switch’. This ability, which describes an oscillant trajectory, is the fingerprint of the game. Those who can master the Multi-Gravity Switch, will master Reggie!

In Reggie, every level is different. All of them include fully hand-drawn HD foregrounds and backgrounds. Also, most of them feature dynamic background details, so you can get lost inside our colorful immersive worlds. On the other hand, the main character and enemies are made in 3D to make them feel more alive. They have cell shading, so they blend in perfectly with the 2D material around. Good art direction is the absolute key to the consistent style in the game.

Despite the fact that it has taken place waaaay back in time, the loss of the twelfth century has dramatic consequences in the far future: Science appears not to be developed anymore, which consequently affects Reggie and his friends. Their daring adventure begins when they travel to the past to give a well known scientist the little push he needs to come up with his gravity theory. Of course nothing works out as expected, so this turns out to be just the beginning of their journey!

Reggie, His Cousin, Two Scientists and Most Likely the End of the World features a rich quirky plot which involves a grumpy scientist from the sixteenth century, black holes, time travel, dinosaurs, a gnome University, alternative dark dimensions and an unexpected final villain who likes the universe without science better. Humor is a constant and frequent plot twists keep the player guessing about what will happen next!

The original soundtrack has been carefully composed to feat each scene of the game. The style is cheerful, resembling the Kirby saga, and has a lot of technique from classic conservatory underneath. Reggie is represented by a catchy ska main theme, which is the leitmotif of the character throughout the game. On top of this, each level introduces a different theme perfectly adapted to the scenario, making the game more immersive by enhancing the particular ambience of each location. Furthermore, each cutscene contains a track of incidental music adapted to the action, boosting the cinematographic effect.

Reggie takes the risk of implementing a local two player system not used in any other platformers before. This system is designed with the less skilled player in mind: the intention is to keep they playing the whole time, without being dragged by the best player’s faster pace.

Watch a trailer from April 2019 below.