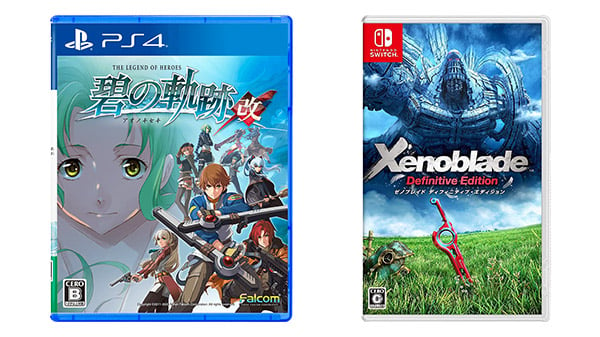 The Legend of Heroes: Ao no Kiseki for PlayStation 4 and Xenoblade Chronicles: Definitive Edition for Switch are the highlights of this week’s Japanese game releases.

The PlayStation 4 version of The Legend of Heroes: Ao no Kiseki, which was originally released for PSP in September 2011, adds a fully-voiced main story, a high-speed skip mode, 60 frames per second support, high image and sound quality, the ability to skip battle cut-in scenes, and various user interface updates, as well as the appearance of characters from The Legend of Heroes: Trails of Cold Steel, whose story runs parallel to Ao no Kiseki. Read more about the game here and here.

Xenoblade Chronicles: Definitive Edition is a remastered version of June 2010-released Wii title, featuring high-definition graphics, new character models, remastered and rearranged music tracks, an updated user interface, and a 10 to 12 hours-long epilogue story called “Future Connected,” which can be played from the beginning without clearing the main game. Read more about the game here and here.

Lt. Lightning ⋅ The Legend of Zelda: Breath of the Wild sequel launches in 2022 ⋅ 12 minutes ago