"Awaken as a golem created by a godlike being and destroy the deadly cult seeking her demise." 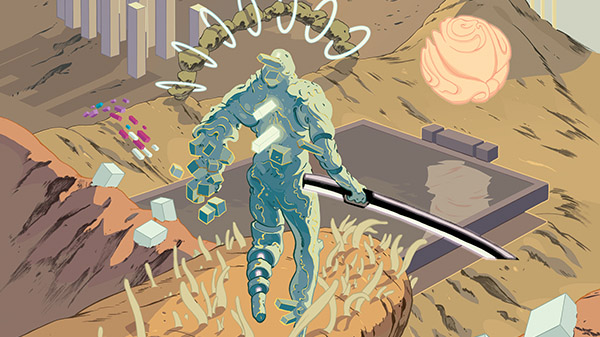 Moonray, a “Souls-like hack-and-slash set on surreal planets,” will launch for PC via Steam Early Access on July 2, followed by “next-generation consoles” at a later date, developer Everything is Full of Gods announced.

The Early Access version will launch at a $9.99 price point, with further price increases planned as development continues until a projected full release in summer 2021. It will only support English text and voice-overs at launch, but will add support for Spanish, French, Dutch, and German in the future.

“Moonray‘s debut on Early Access gives us the chance to both iterate on existing systems and shape an unconventional universe,” said Everything is Full of Gods founder Rodrigo Etcheto in a press release. “While we have a clear vision for a one-of-a-kind sci-fi action game, the fresh perspectives and feedback gained from Early Access will shape the future of Moonray and provide the best possible experience when the console communities join at 1.0.”

Here is an overview of the game, via Everything is Full of Gods:

Awaken as a golem created by a godlike being and destroy the deadly cult seeking her demise. Slay the dangerous denizens of the Salvador Dali-inspired world of It-Ao, brought to life with gorgeous AAA-quality shaders and techniques pushing the limits of PC hardware. The abstract wasteland pulses, synchronizing with the rhythm of a cinematic electronic soundtrack and creating a menacing, hypnotic atmosphere.

Moonray‘s combat quickly shifts from simple beginnings to tense showdowns. Weave light and heavy melee attacks with Hyperblaster shots while dodging and parrying blows to wear down and triumph over the opposition. Slay enemies to earn materials spent at resting points known as Beams of Light to upgrade health, stamina, and healing abilities.

Early Access features several hours of gameplay among desert vistas, with forest worlds set to appear in the 10-to-15 hour campaign debuting in version 1.0. Updates in the near future will include powerful weapons to find and upgrade, new offensive and defensive abilities to turn the tide, and massive new biomes full of mysteries to uncover.

Lentorel ⋅ Gal Gun Returns announced for Xbox One, Switch, and PC ⋅ one minute ago