Completely free via the Epic Games Store for the first week.

Samurai Shodown NeoGeo Collection will launch for PC via the Epic Games Store on June 11 and Steam on June 18, and for PlayStation 4 and Switch digitally on July 28 for $39.99, publisher SNK and developer Digital Eclipse announced. A physical edition will follow for PlayStation 4 and Switch this summer. The PC version will be completely free via the Epic Games Store from June 11 to June 18.

In Japan, the PlayStation 4 and Switch versions will launch both physically and digitally on July 30 for 4,980 yen.

While an Xbox One version of the collection was initially announced back in March 2019, today’s announcement makes no mention of said version. (Update 10:57 p.m.: While the press release and official website make no mention of the Xbox One version, Digital Eclipse studio head Mike Mika said on Twitter that the Xbox One version will be available at the same time as the PlayStation 4 and Switch versions, saying its absence from the announcement is “not as intended.” He added, “Xbox has been always in the plan and everything, weirdly not in the press release. Weird mix up someplace. It is definitely coming out and we finished it alongside the other SKUs.”)

It all began in ‘94. And now, the weapon-based fighting game series that swept the world is ready to be taken home as a stellar collection! Six NeoGeo titles as well as one mysterious, unreleased game are featured! What is more is that each game features online battle modes as well as a Museum Mode and music player! This collection is a must-have for all Samurai Shodown fans across the globe! 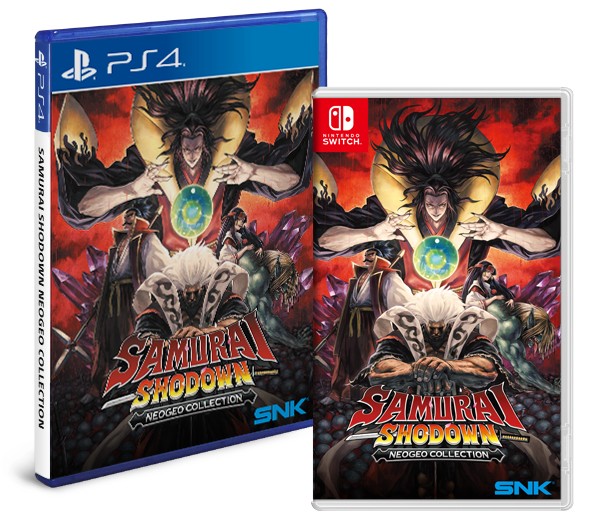 In a world dominated by fighters where opponents duked it out with their fists and kicks, Samurai Shodown sliced into the scene with their brand-new take on the genre. Not only does each attack hit like a truck normally, but damage actually increases further due to the implementation of a POW meter that fills up upon taking damage. This, coupled with its unique setting and boastful roster of 12 peerless warriors made this game a phenomenon that everyone was talking about. Do you have what it takes to take down Shiro Tokisada Amakusa? 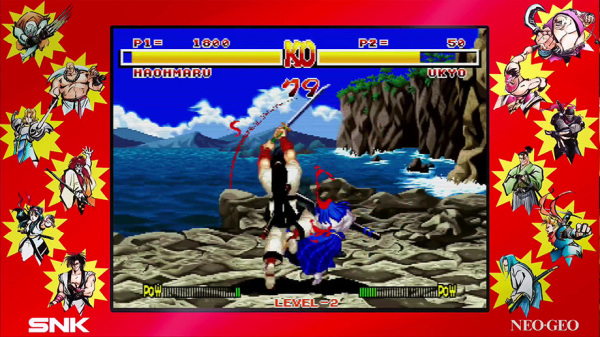 This game further expanded the thrill of the fight by adding forward and back rolls, a low-attack dodge, and an attack that breaks the opponent’s weapon! These additions to the game brought it into a-whole-nother level of skill and precision unlike any fighter at the time. Haohmaru goes up against his long-standing rival, Kibagami Genjuro, as well as three other additional characters—bringing the roster to a total of 15 warriors. 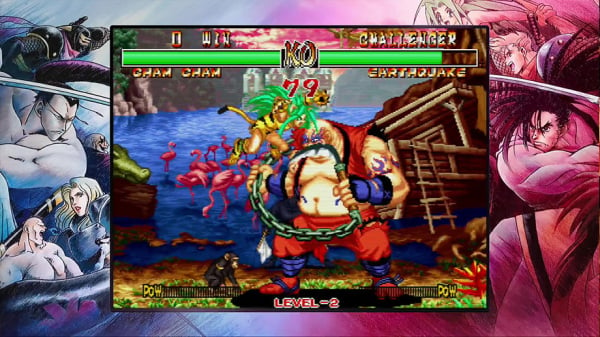 This title took the Samurai Shodown series onto a different path with an overhaul to the button and system settings. Players can now choose between two different fighting styles for each character, named Slash and Bust. Additionally, players can now choose between three grades when choosing a character. These are Beginner Class, Medium Grade, and Upper Grade, which add a lot of depth and complexity to an already complex game. 12 warriors set out to bring Zankuro Minazuki’s reign of terror to an end. Will they succeed? 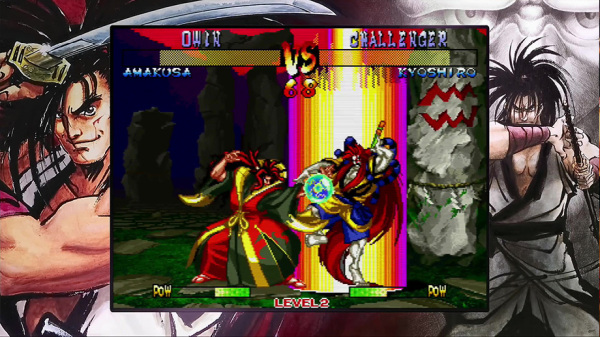 Following after the previous installment comes new additions in the form of a CD 14-multislash combo and Rage Explosion (w/ Fatal Flash and Link Slashes to boot!). Additionally, the single player campaign features a timer and the ending received changes on the time finished. Warriors from past titles join up with new faces to form a hearty 17-character roster. As the name implies, Shiro Tokisada Amakusa is back again but is weak as his spirit was split in two. If he succeeds in his quest of joining both halves, the world will be plunged into darkness forevermore. 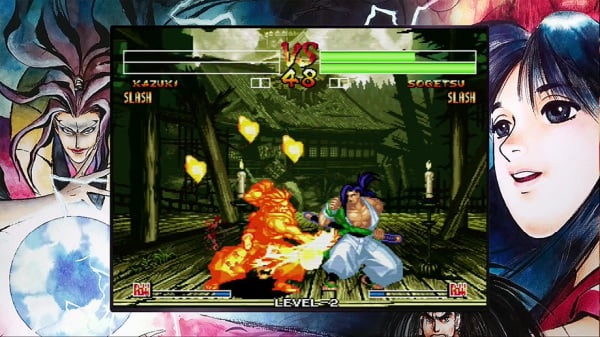 Seven years would follow until the series saw another sequel on the NeoGeo. Four new characters including Majikina Mina and Tokugawa Yoshitora join the roster bringing it to an explosive 24 characters. The system has been updated with new features such as a Sword Gauge and a state of meditation called Concentration One. The series was back on track with its game balance being focused on devastating blows and quick dodges. 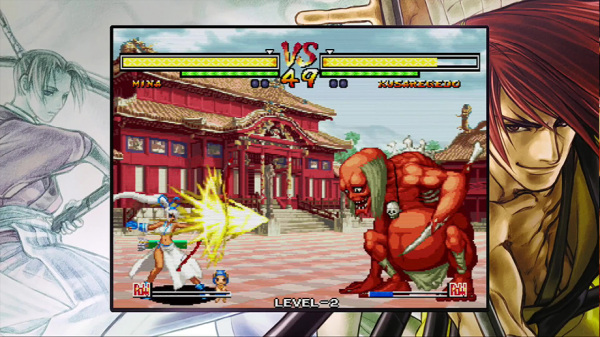 The final game sold on the NeoGeo. Every character is now equipped with a devastating Overkill attack. This title brought balance changes that truly gave players the thrill and excitement expected out of Samurai Shodown. Now, with the inclusion of previous boss characters, the roster stood at a girthy 28 bloodthirsty warriors. 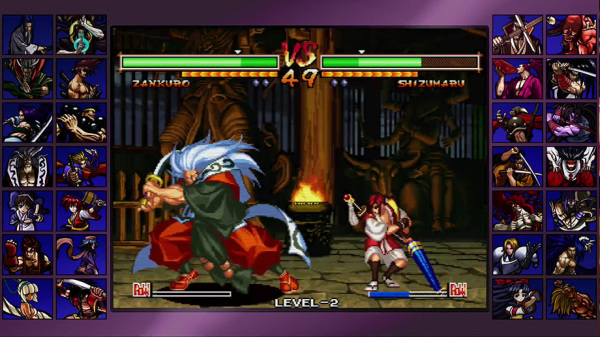 The gameplay of Samurai Shodown V Special has been left untouched, but this previously unreleased title features a brand-new story and ending. This is the true and final game made for the NeoGeo. 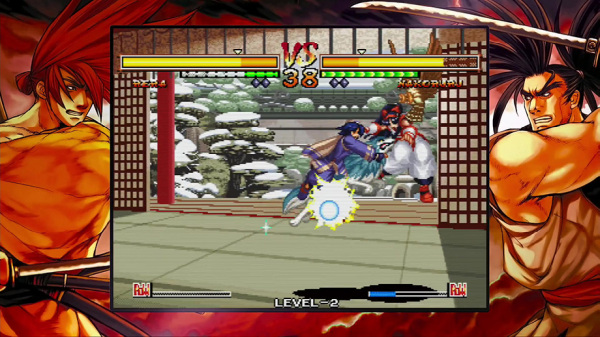 Spirited duels with swordsmen all over the world!

Get paired up with warriors of a similar level with Ranked Match, or just blow some steam off on Casual Match. Invite your friends (or foes) for a beat-down in Challenge Friend. Take on Samurai Shodown fans across the world with the push of a button. 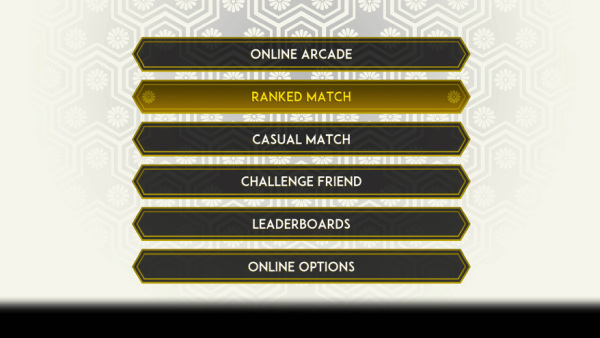 Over 2,000 files ranging from illustrations to classic tracks! Get ready to dive into the museum that’s overflowing with history.

The museum within this collection is packed with over 2,000 precious development documents and images; it is everything a fan would want! There are even candid videotaped interviews with the developers as they discuss what happened during development. Prepare to dive straight into the world of Samurai Shodown with this collection! 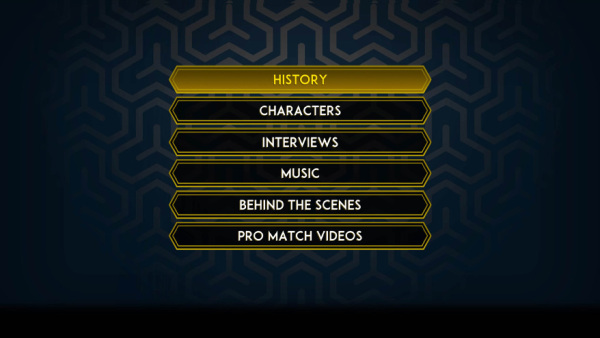 The music player boasts an impressive 200-plus track list.

Relive the excitement of the Samurai Shodown series by listening to its wonderful soundtracks. There are over 200 tracks to choose from spanning six titles in the Music Player found inside the museum. 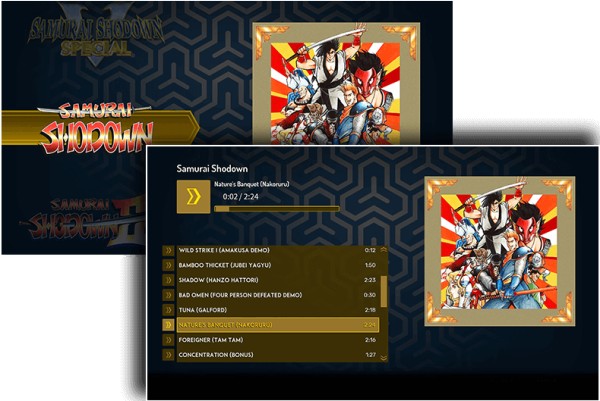