The fated struggle of nine individual races fighting against destruction. 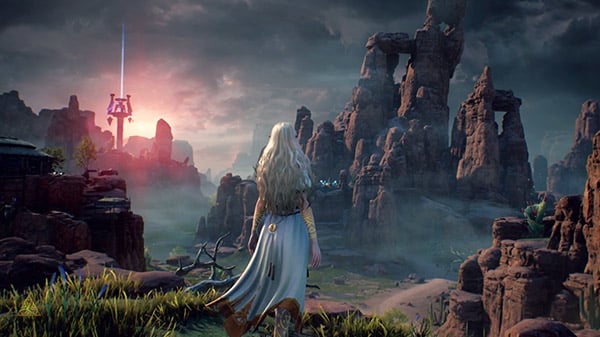 NetEase Games has announced The Ragnarok, an open-world adventure game based on Norse mythology. It will be available for console, PC, iOS, and Android.

The Ragnarok was built upon the concept of being able to play the same game across all platforms, and according to GamerSky, NetEase Games established an international team that spent over two years on research and development to do so.

The player takes on the role of a hero summoned to the world to stop the destruction of Ragnarok. Along the way, the player will explore dangerous deserts, forgotten caves, ancient forests, and fantasy city-states, do business with dwarves, follow the trail of the sinister people without faces, and uncover the truth of Ragnarok.

Here is the official description:

Through an orchestra and modern dance performance, The Ragnarok, a role-playing game, takes the audience on a journey to save their kingdom with a spectacular rendition of the game’s theme song, “The Ragnarok.” The Ragnarok is a cross-platform high quality game that offers a free interactive dynamic open world based on Nordic mythology. In this elaborately depicted world, the natural scenery is changing dynamically as light and shadow move, the mythical deities are transformed into dragon flying across the sky. Mysteries of this world are awaiting.

And here is our translated description from the official Chinese website:

The Ragnarok is an open-world adventure game based on Norse mythology that will be available for all platforms. Under the doomsday prophecy of Ragnarok, the title will tell the fated struggle of nine individual races fighting against destruction and guarding their homeland in a world of dragons and giants.

Watch a set of videos below..

Update 10:50 p.m.: NetEase Games has sent out the official English press release, which titles the game The Ragnarok (instead of the previously used Project: Ragnarok). We have updated the post with the proper title and English description.

The Last of Us Part II 'Inside the Gameplay' developer diary Previous post
Multiplayer survival action RPG Frozen Flame launches for PC via Steam Early Access this fall, later for consoles Next post

Zuhri69 ⋅ Tales of Arise ‘Tales of Festival 2020’ trailer, further news to come this spring ⋅ 5 minutes ago

Nobody ⋅ The Legend of Heroes: Trails of Cold Steel IV for PC launches April 9 ⋅ 7 minutes ago

Nobody ⋅ Tales of Arise ‘Tales of Festival 2020’ trailer, further news to come this spring ⋅ 8 minutes ago