The jet racing game from the creators of Senran Kagura. 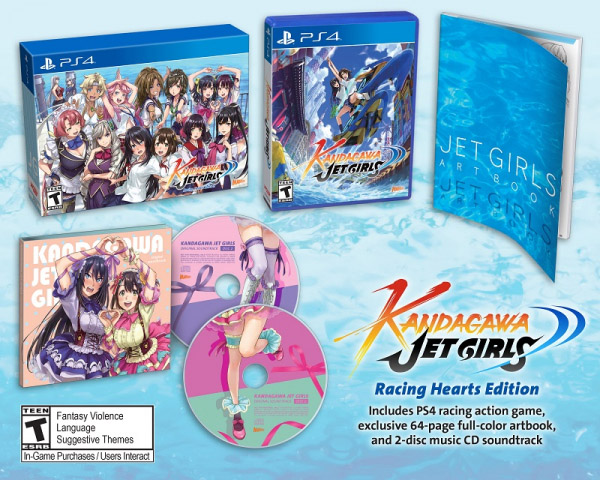 It should be noted that while the PlayStation 4 version has not yet been announced for release in Europe, Marvelous Europe will likely follow with its own announcement soon.

The “Racing Hearts” physical edition will include a copy of Kandagawa Jet Girls for PlayStation 4, two-disc soundtrack CD with 54 tracks, and a 5.5 inches by 7.3 inches softcover 60-page art book, all housed in a special box with exclusive artwork illustrated by Hanaharu Naruko.

Jet racing is the sport of the future and the waterways of Tokyo host some of the most daring and skilled young athletes of Japan on their high-speed jet machines. Drivers, also known as “Jetters,” pair up with a “Shooter” armed with water weapons to blast away the competition. They must wow spectators if they want to win, building up their boost meter with spectacular aerial stunts while dodging obstacles and evading enemy attacks. Pick from the seven two-girl teams to race with, discovering each of their hopes and motivations for racing as you play through 64 episodes of lighthearted racing drama in single-player, or go online and put your skills to the test racing against other players.

Kandagawa Jet Girls will arrive with tons of customization options allowing players to choose their own look for their team and machine, including dazzling special effects. The customization is more than skin-deep, allowing players to go under the hood and fine-tune their jet machine’s performance to match their racing style and squeeze out every ounce of power. Players can play through the game solo or take their custom teams and machines online for multiplayer mayhem against up to three opponents in casual or ranked matches.

The Jetters and Shooters won’t be alone for long–the shinobi girls of Senran Kagura will be infiltrating Kandagawa Jet Girls in search of more summer activities! Ryobi and Ryona are already included as part of the base game in the western release as a special gift to all players, and the first to join the lineup as premium downloadable content after launch will be the duo of Asuka and Yumi, ready to mystify and confound the competition and thrill fans with their shinobi skills. More of their friends are on the way, and additional details about the Senran Kagura downloadable content characters will be announced at a later date.

Watch the opening cinematic below. View a set of screenshots at the gallery.

deerox ⋅ Laid-Back Camp: Have a nice day! launches for PS4, Switch this fall in Japan ⋅ 25 minutes ago