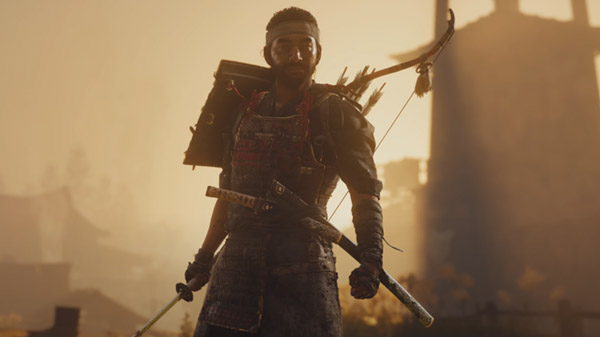 For exploration, Sucker Punch asked itself, “How can we let the island guide you in the most thematic and immersive way possible?” The answer was the “Guiding Wind,” which allows you to call a gust of wind at any time that guides you to your destination.

While exploring, you may come across smokestacks indicating people in need of help; bird that lead to points of interest such as hidden objects; abandoned buildings with rare resources; foxes that guide you to shrines; and more. Once you have visited a location, you will be able to return later via fast travel.

In combat, Jin can fight both as a samurai and as the Ghost. When fighting as a samurai, Jin challenges enemies honorably to lethal standoffs, parrying to open them up. When fighting as the Ghost, he fights using more deceptive methods such as distractions to lure enemies to their deaths. Jin can use his grappling hook to climb or swing across gaps, or even use his enemies’ own weapons against them.

Players can customize Jin with various gear, including Charms that give him an edge in battle. In addition to Charms, Jin can use Technique Points to learn and upgrade skills. You can even change the color of Jin’s armors using the flowers you find in the fields.

Both the Japanese voice track option and “Samurai Cinema” mode can be selected before the beginning of the game. Samurai Cinema is a windy, black-and-white, film-grain mode that replicates the feel of old samurai films.

Ghost of Tsushima is due out for PlayStation 4 on July 17 worldwide.