Caravan with friends across platforms in upcoming remaster. 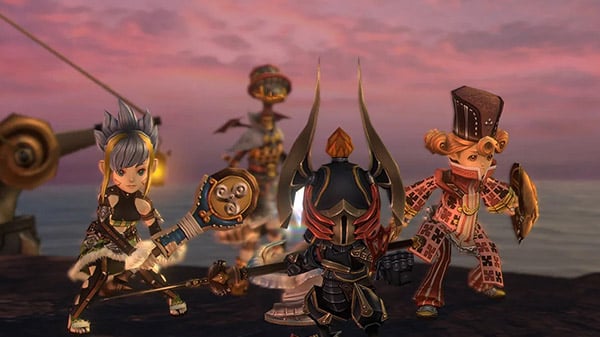 Outside of “summer 2020,” a western release date has yet to be announced.

Additionally, Square Enix announced the new “Imitate” system, which allows you to change the player’s appearance and voice in battle to that of one of the sub-characters that appear in the story by collecting certain items. If you are playing online multiplayer, you can put together a dream caravan crew that would not be possible in the main story.

Other new elements include:

Long ago, a giant meteorite fell on the land, and deadly miasma blanketed the world.

Crystals keep the deadly miasma in check, but the crystals’ power is not eternal.

Young adventurers embark on a journey once a year seeking “drops of myrrh” to purify the crystals.

These are the chronicles of brave young adventurers who journey to protect their home.

These are the “Crystal Chronicles.”

In Online Multiplayer Mode, caravan with friends wherever they may be. Cross-platform support offered so that you can journey together across different hardware: on PlayStation 4, Nintendo Switch, and even smartphone devices!

Players on separate platforms, whether it be PlayStation 4, Nintendo Switch, or even iOS and Android, can come together to enjoy online gameplay! Accessible Adventure! Enjoyable with Anyone!

Supports save data transfer between platforms!

Freely transfer save data between platforms!

Freely select the platform of your choice and go beyond the boundaries of mobile and home console devices!

Experience the game on the platform that best matches your own play style.

Watch an updated version of the Tokyo Game Show 2019 trailer below.