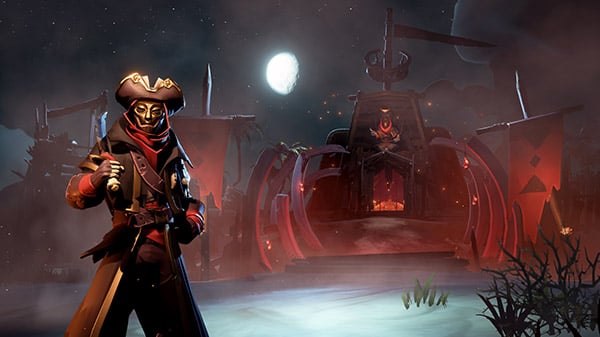 Sea of Thieves‘ latest monthly update, “Ships of Fortune,” will launch on April 22, publisher Microsoft and developer Rare announced on the latest episode of Inside Xbox.

The “Ships of Fortune” update introduces a new element to trading companies, but allows pirates to serve as emissaries and collect bonus loot and exlusive reward, while introducing Reaper’s Bones as an all-new company. The Arena has also been overhauled, replacing treasure maps with a single chest and cash-in location.

Here is a full overview of the update, via Microsoft:

Got a favorite Trading Company on the Sea of Thieves? The original Gold Hoarders, Merchant Alliance, Order of Souls and Athena’s Fortune each appeal to different players – and we’re expanding them with the option for players to become Emissaries in Ships of Fortune. Taking on this special duty allows pirates to earn boosted rewards from their usual Voyages, plus special cosmetic rewards for those who perform best!

Represent for Greater Rewards… and Risks!

To find out about becoming an Emissary for one of the Outpost Trading Companies, speak to their representatives at the Outposts and inspect the nearby table. Emissary roles are highly prized, so you’ll need to make a significant donation to prove you appreciate the privilege!

Hoist the Emissary Flag as you serve in this prestigious role, and advance through five Grades by exemplifying your chosen Company – for example, by finding and unearthing chests as a Gold Hoarder. The higher your Grade, the bigger the multiplier you’ll get when cashing in your haul! Beware, as other pirates will know that an Emissary’s ship is likely to be laden with loot.

You’ll soon be able to dress your pirate and ship to suit your current Company of choice, heading out as a true ambassador to earn big rewards and prove your skills against other players in the competitive Emissary Ledger. Earn Titles for increasing your standing and compare your progress to that of your friends. Remember, however, that while sailing as an Emissary you will get noticed—especially by the rival Emissaries of a new, glory-hungry Trading Company…

A new and mysterious Company known as The Reaper’s Bones, teased throughout our previous monthly updates, has emerged! Keeping your fancy Emissary status with the Reaper’s Bones around won’t be so easy, as their own Emissaries have but one duty – to lay their rivals low and take their Emissary Flags as trophies! Of course, taking their loot is a close-running second priority.

The new Company can be found at The Reaper’s Hideout, where they seem to encourage their ideals of ‘true piracy’ without the need for honour among thieves. For the Reapers, following your passion and having the will to come out on top is what being ‘a pirate for all eternity’ really means. If you choose to become an Emissary for a Company other than theirs, expect no quarter from these merciless miscreants.

Players excited at the thought of some competitive action should also check out overhauled matches in our dedicated Arena mode. Old treasure maps have been replaced by a single chest marked by a Sea Dog Beacon, with just one cash-in location to ensure a furious battle for victory! Contest times have also been slashed to 15 minutes, guaranteeing a frantic pace in each match.

Whether your battles take place in Adventure or Arena, we’re also adding a new way for crews to look out for each other on the seas. Now, when pirates are defeated, there will be a brief window during which their crewmates can revive them before their soul drifts to the Ferry of the Damned. This should allow for quicker gameplay loops as well as some new tactical choices for co-operative crews.

Did We Mention Cats?

But enough about this free update’s new Emissary system, Trading Company, rewards, cosmetics and mechanics – we need to talk cats! No longer satisfied with just parrots and monkeys, the Pirate Emporium will now have three breeds of feline friend for your pirate: the scruffy Wildcat, fluffy Ragamuffin and slinky Mau. Each breed comes in a variety of color options, so you can hand-pick the kitty that best suits your pirate and ship.

You’ll also be able to dress up your cat, of course. We’re starting out with very regal Sovereign outfits and special Legendary outfits – check out the bundle offers in the Emporium for the quickest way to get yourself a new cat companion in cute clobber. Elsewhere in the Emporium you can pick up the Night Wulf Ship Collection inspired by tales of heroism from the (very) olden days, or perhaps a range of crabby new emotes – all valid ways of attracting attention to your new cat.

There’s a lot coming your way in Ships of Fortune on April 22 and we’re excited to see how players go about using the new Emissary system, either to role-play as their favorite Trading Company or simply to maximize their earnings and boast of their achievements. Or maybe they’ll choose to earn bragging rights through the daring Reaper’s Bones. Whether you’re most excited about a grand new calling as an Order of Souls Emissary, taking on other players for trophies and plunder or simply getting to pet a cat dressed as a pirate, we look forward to seeing you on the seas very soon.

Sea of Thieves is available now for Xbox One and PC via the Microsoft Store, as well as Xbox Game Pass. The PC version is coming soon to Steam.

Watch an introduction video below. View a new set of screenshots at the gallery.