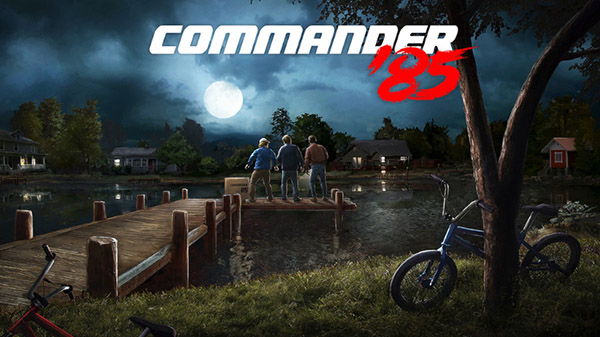 Publisher Ultimate Games and Polish developer The Moonwalls have announced Commander ’85, a new game that combines adventure, retro science-fiction thriller, survival elements, and hacker simulator. It will launch for PlayStation 4, Xbox One, Switch, and PC via Steam this fall.

A Kickstarter campaign seeking CA$8,000 in funding is currently live. The developer noted that while Commander ’85 is “funded and mostly finished,” the campaign is primarily to “expand the scope of the project” with additional features such as a virtual reality mode.

“May 13, 1985. Today is my BIRTHDAY!!! Mum gave me the best present ever! A Commander 85—a super modern computer with real artificial intelligence! It’s very smart, and I can talk to it and play games on it. I can’t wait till the other boys see it!”

Commander ’85 is a sci-fi thriller about a seemingly ordinary birthday present that changes the lives of the main characters forever, disturbing the sleepy peace of the Chicago suburbs. However, when the military experiments get out of control and the world faces the threat of nuclear war, you won’t be alone. Together with a group of friends and a crazy scientist, you’ll have to try and end the Cold War, discover the secret of the Commander computers, and find out the mysterious truth behind the Roswell incident…

Decide the fate of the world using an advanced system of interaction with the computer’s artificial intelligence. Build its trust and friendliness towards you, listen to its sarcastic comments and even watch as it quarrels with your parents! With hundreds of possibilities and random elements in the game’s plot, every time you play will be different, with your choices leading to one of three possible endings.

Immerse yourself in the life of Polish immigrants in 1980’s America, learning more about their culture and problems. Remember that all parents are the same, regardless of their origins. Experience a sense of nostalgia as you recall your own childhood through the game’s randomized events and elements of your environment, from discussions about the school to nagging about how much time you’re spending in front of the computer. Complete the chores your parents give you, too—they may prevent you from saving the world, but at least you won’t be grounded or banned from playing!

quodvadis ⋅ Sakura Kakumei: Hanasaku Otome-tachi to end service on June 30 ⋅ one minute ago